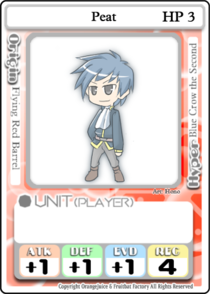 Peat (ピート Pīto) is one of the unlockable characters in 100% Orange Juice!.

Peat is a character with excellent stats, featuring a increase in every combat stat and a reduced revive stat. As a result of these stats, Peat is very effective in combat having both the ability to deal damage and avoid or defend against it. Additionally, his lowered requirement for revive rolls lets him get back into the fray in the event that he is KO'd by an opponent. With favorable rolls, Peat can last for quite awhile against weaker opponents, while dealing a substantial amount of damage in return.

Unfortunately, the main downside to Peat is that even with his excellent combat and recovery stats, he suffers from having an abysmally low health stat similar to that of Nanako. This stat greatly reduces his ability to sustain combat, and the player should avoid fights that will quickly drain Peat's health. Even having a favorable defense roll will result in Peat being stripped of a third of his health at a minimum and an unfavorable evasion rolls may lead to an instant KO. This weakness is further compounded by stage hazards from field events and damaging traps like

Mimyuu's Hammer, which affect Peat far greater than most character. 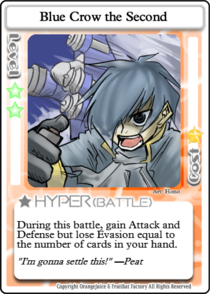 Peat's hyper is Blue Crow the Second. When the Hyper is used, it causes the player to gain attack and defense but lose evasion equal to number of cards in the player's hand.

Blue Crow the Second is a powerful, stat-boosting Hyper that provides a large boost to attack and defense at the cost of evasion. The additional stats are added based off the number of cards in the player's hand at the time of activation. The Hyper does count itself before use, thus if the player has no other card, the Hyper has a minimum gain of +1 attack and defense and lose 1 evasion. The Hyper can be used both offensively and defensively, but care must be taken, as the drop in evasion combined with Peat's low health necessitates using defense against enemy attacks when the Hyper is active.

The Hyper itself enables Peat to easily overpower most opponents and is an excellent tool to protect Peat's small health stat. As the effect scales with the number of cards in the player's hand, it's advised to continually draw cards throughout the course of the game, for maximum effectiveness. Ideally, the player will have a full hand of cards, however under specific conditions, the Hyper can be activated with a hand of 4, giving the player a massive gain of +4 attack and defense and -4 evasion. The Hyper also benefits from it's cheap star price and low activation level.

The main downside to this Hyper is that relies heavily on the presence of cards. A full hand can be easily attained against opponents like Aru or on Boards with MiracleMiracle
Every 5 Chapters, all

Double panels accordingly. This effect lasts for the duration of the Chapter., but can be stifled by cards that cause Peat to discard cards such as

Scrambled Eve. The other more obvious pitfall too the Hyper is the loss of evasion, which can result in KO if Peat is low on health and fails to KO the opponent.

In Co-op mode, Peat doesn't change much as his hyper remains the same, however, his recovery stat rises.

Like all buffed attack stat characters, Peat can be an effective attacker. With the stat boost at the role's max level providing him with a +3 attack stat, Peat can deal decent damage every attack. When combined with his hyper,

Blue Crow the Second Peat can deal a massive amount of damage to a boss, even with a low role. Meanwhile, his partially buffed defense and evasion stat can help the player survive to fight another battle. Despite his strengths, it would generally be best, for the player to have an ally who is either a guardian or supporter to help prevent Peat from being KO'd to avoid the higher recovery from the role.

While not as strong defensively as fellow low HP character Nanako, Peat can reap the benefits of being a guardian by gaining a powerful defense stat to keep him alive longer. Given that peat already has a slightly buffed attack stat, the player will be able to battle the boss with a bit more peace of mind that they can likely survive the counter-attack delt by the boss. The role is definitely far from perfect for Peat, however, as the player won't really be able to provide shields to allies as a result of Peat's very low HP.

Peat should more or less never be used as an avenger as his stats do not align well for the position at all. As Peat has one of the smallest HP pools in the game, he realistically cannot benefit from the role's ability even with the +2 HP boost the role provides at max level. In general, Peat does not respond well to damage and usually, the player's goal is strike first in combat, to hopefully deal a great amount of damage before being KO'd from his low HP. Attacking second as the role requires contradicts this playstyle and likewise doesn't work very well with both Peat's low HP and only semi-effective defense buff. While the player can theoretically ignore the role's purpose and just use it as an HP booster of Peat, the inability to reap the benefits of the role make it a poor choice.