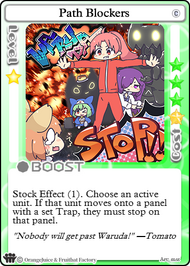 Stock Effect (1). Choose a unit. If that unit moves onto a panel with a set Trap, they must stop on that panel.
Level
1 ☆
Cost
13 ★
Limit
3 per Deck
Deck Points

Path Blockers is a 1-star boost card that forces the target to stop on the next trap they pass, triggering it in the process. Upon activation, the player can target any unit, including themselves, allies, or opponents.

Path Blockers is a card whose usefulness scales based on the trap cards available to the player. The ability to force an opponent to trigger certain traps can be extremely powerful when combined with cards like

Flamethrower. The player can even target themselves if the situation calls for it, such as using it to stop on a

Home panel to steal a

Piggy Bank from an opponent. Any character whose playstyle revolves around traps should consider Path Blockers for their deck. Characters who flood the board with traps, such as Krila, can make good use of this card to cause opponents to land on their traps more often. On the other hand, characters such as Saki, who prefer to place traps in more strategic locations, can use this card to force players to trigger their traps at a time when it will benefit them the most. Star Breaker, especially, is one of the best users of this card for a multitude of reasons. Firstly, she does not necessarily need to run traps to benefit from Path Blockers thanks to

Star Blasting Fuse, freeing up slots in her deck for battle cards or cards that help her fight opponents like

Ambush. Second, her opponents cannot see where her

Invisible Bombs are, which prevents them from playing around them. This can potentially cause a player to force themselves or others into a bomb when they were aiming for another trap. Lastly, Star Breaker is not bothered by its high star cost due to her inability to collect star normas.

Obviously, if the player isn't playing many traps, then Path Blockers can become quite useless. Its relatively high cost can be a deal-breaker for some characters, considering that many low level traps aren't worth triggering for the 13 star cost. If the selection of traps is diluted with too many low power traps, such as

Dangerous Pudding, it will be difficult for the player get opponents to land on more powerful ones, especially if they are all clustered together. Consequently, the MinelayerMinelayer
Every 3 Chapters, a Trap Card will be set on a randomly determined panel. These Trap Cards are not affiliated with the Center Deck, and will therefore not return to the Center Deck afterwards. The cards include:

Mimyuu's Hammer field event can cause problems for players who play this card as it litters the board with numerous low level traps. In addition, most characters with trap based hypers are immune to their own traps, causing this card to benefit them substantially more than other characters. An exception to this, however, is Saki. Path Blockers can be used to force a player to trigger her

Big Bang Bell before it has had a chance to charge or even force Saki to detonate it on herself.