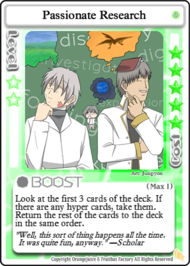 Look at the first 3 cards of the deck.
If there are any hyper cards, take them.
Return the rest of the cards to the deck in the same order.
Level
2 ☆
Cost
5 ★
Limit
1 per Deck
Deck Points

5
Symbol
30px
Illustrator
Junpyon
Uncommon Card
Mixed Pack
"Well, this sort of thing happens all the time. It was quite fun, anyway!" —Scholar

Passionate Research is a 2-star boost card that allows the player to see the top three cards on the deck. Any hyper cards revealed this way are immediately added to the user's hand. Other players cannot see the revealed cards (excluding co-op mode), but they do know how many hyper cards are found with it.

Passionate Research is a strong card for hyper reliant characters. Putting this card in the deck essentially grants player more chances to draw out their hyper card. Characters like Krila, Marie Poppo, and Peat all benefit from having more of their respective hyper cards. Passionate research can also benefit characters such as QP (Dangerous) and Nath by showing them the contents of the top few cards of the deck. These characters rely on drawing a specific type of card (pudding and battle cards respectively) and Passionate Research allows them to plan their draws to help obtain these cards.

There are times when playing Passionate Research will have poor results. The fewer cards are in the deck, the fewer chances the player has to find a hyper card. Playing this card when there are two or fewer cards in the deck in generally a poor choice. For a similar reason, using Passionate Research soon after a previous Passionate Research activation will likely leave the user with nothing, as any hyper cards have already been taken. Wait until someone has drawn those three cards, or for a CharityCharity
Every 5 Chapters, all Players will receive 1 Card at the beginning of the Chapter. event to take place first. In addition, the effects of

Evil Spy Work - Preparation can make this card treacherous for any character that isn't Tomato.

Evil Spy Work - Execution counts as a hyper card, so Passionate Research will grab any of these that it finds. While Tomato will be ecstatic about all the Waruda Machine, Blast Off! she just drew, any other character will likely be KO'd. Be aware that using this card announces to other players whether the user has received a hyper card, which allows them a chance to plan ahead and can make the player a target for the likes of

Tragedy in the Dead of Night, or