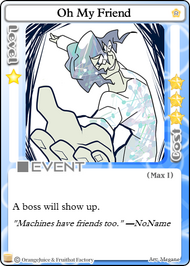 Oh My Friend is a 1-star event card that causes the Boss EncounterBoss Encounter
When Norma level 4 is achieved for the first time by any player, all

Boss panels. While Boss Encounter is in effect, any player who stops on a Boss panel will battle the Boss unit. This event will continue until the Boss unit is defeated. event to take place, replacing all

Boss panels until the boss is defeated.

Oh My Friend can be quite dangerous for most characters due to the powerful boss it brings into to the game. Although its uses are narrow, the characters who benefit from Oh My Friend do so while putting their opponents at an extreme disadvantage. Tank characters like Fernet or Kyoko can easily take a hit or two from the bosses that would normally crush other characters, providing them with a much safer experience while their opponents are put through the gauntlet. The card also has some very specific comboes that can further its deadliness. NoName can put Oh My Friend in his deck as an additional way to summon the boss without having to use his hyper

Overseer, and his passive ability can put him at substantially less risk than other opponents. Sham can benefit from this card immensely as it dramatically increases the threat level of her hyper.

Delta Field can be used during boss encounters to force multiple opponents to fight the boss at a huge disadvantage to their rolls, provided they are standing in front of a

Unfortunately, Oh My Friend is extremely pricey for a 1-star card. It usually will not be played until the mid to late game without the aid of

Play of the Gods due to its steep 30 star cost. The power of Oh my Friend varies based on the map it is used on. Boards like Christmas Miracle can provide players with plenty of alternative routes to avoid the boss panels while encounter-heavy maps like Warfare can make the game extremely dangerous for everyone involved. Frail characters that depend on dodging like Suguri will put themselves in a lot of danger by playing this card, due to the high probability of being one-shot by the boss. Oh My Friend will also inconvenience offensive characters looking to complete wins norma, making it a particularly troublesome counter to Star Breaker. As long as the boss is active, they will be unable to gain wins from

Encounter panels and will be forced to fight other players or defeat the boss in order to level up.