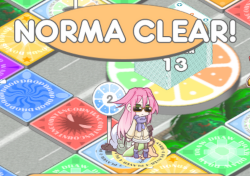 Norma is the key to victory in 100% Orange Juice!'s traditional mode. The ultimate goal of a game is to reach norma level 6 before any of the other players, which will result in the player winning.

Despite its strange name, "Norma" is nothing more than a series of levels, with each norma level requiring the player to fulfill some objective to reach to level up.

Before norma can really be discussed, you first need to understand how a home panel works. A home panel is a specially marked panel the player starts on at the beginning of a game. Each player has their own home which can be identified by both its number and color. The number matches the player's turn order, which is displayed in the countdown before the game starts. So the player who moves first "Player 1" will have the number 1 on their panel, the player who moves second "Player 2" will have the number 2 on their panel, and so on and so forth. The color also matches the player's hud color, which will be discussed more in the next section. The appearance of the home panel can be adjusted in the future, but the rules on its numbering and coloring will always apply.

The hud is a very important tool, which provides very crucial information about the player and their progress towards their norma. As previously stated, the color of the hud matches the player's home panel and also lists the player's move order "Player #" above the player's name. The player order is from left to right: red moves first, blue moves second, green moves third, and yellow moves last.

*Note: Some events modify the HUD to add more features for the event, but the key features listed above remain the same.

In general, the player's first objective at the start of a game is to collect 10 stars, but there are some characters with specific exceptions. Whenever the player levels-up they will have the option of selecting 1 of 2 norma objectives: star norma & wins norma. As the name implies, star norma is centered around star collection and wins norma is centered around defeating other players and random opponents found on

Encounter panels. Generally, star norma is the most advised norma but wins norma may be applicable with the right character or conditions.

It is important to note, however, that a player should choose their norma objective wisely, according to their current situation. Once an objective is chosen, it cannot be changed, and the player will be stuck if they cannot fulfill it. Below is a table of the objectives the players will be able to choose from each time they level-up their norma level:

An important aspect that adds a dimension of danger to norma, is that when norma level 4 is reached by any player for the first time, the "Boss Encounter" field event will activate. This causes all

Encounter panels to be replaced with

Boss panels. Note that Boss Encounters will normally occur only once per game but some card effects may cause additional encounters to occur. While Boss Encounter is in effect, any player who lands on a boss panel will battle the Boss unit. Boss units are powerful and often deadly opponents with a large supply of health and brutal attack power. Some notable bosses are: Store Manager, Shifu Robot, and Flying Castle. Which one will appear is determined by which board the players are currently playing on. The Boss Encounter event will continue until the Boss unit is defeated. More information can be read about field events on their designated page.

Star norma is an objective, based around collecting stars. Generally, the player will be focusing on

Wins norma is an objective, based around defeating opponents. Generally, the player will be focusing on

Encounter panels, and lots of combat. The player will receive a varying amount of wins, depending on the opponent they defeat. Below is the table of the potential wins earned if the player successfully KO's thier opponent: 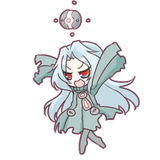 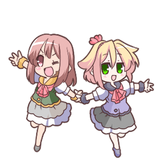 If the player is using the DLC 24, they will have access to the Pudding Pack which contains the card

Backdoor Trade. Backdoor Trade is a boost card that enables the user to activate a norma check without landing on a 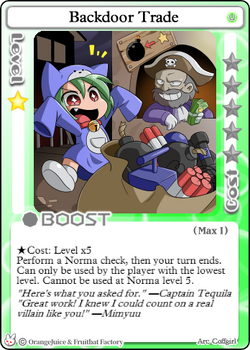