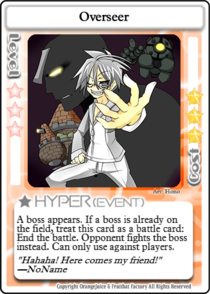 A boss appears. If a boss is already
on the field, treat this card as a battle card: End the battle. Opponent fights the boss instead. Can only use
against players.
Hyper Info
Effect Type
Event
Level
3
Cost
30 ★
Symbol
[[File:|30px|link=]]
Illustrator
Hono
"Hahaha! Here comes my friend!" ―NoName

NoName's Hyper Card is Overseer. When this card is used it will spawn a random boss, if a boss is already present it will be treated as a battle card. Using Overseer in battle will call upon the current boss to take your place in battle. Overseer can only be used on players and will not give you wins or stars if the boss kills said player, if the player kills the boss then player will receive the stars from the boss.

Using Overseer is an effective tactic when NoName is in "Head" form as it can prevent the player from death. The Hyper can also be used to guarantee the death of an enemy that could potentially be a threat, as the boss will generally roll a high attack roll value.

Overseer can be used to great effect against characters such as Star Breaker who focus on Win Norma, as spawning a constant stream of bosses will prevent, or at least slow the characters progression of achieving the necessary amount of victories.