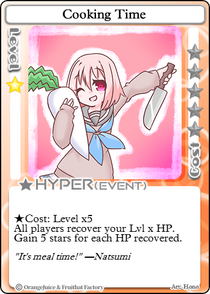 Natsumi's hyper is Cooking Time. When activated, all players (including the user) will be healed up to the user's level. The user will gain 5x stars for each hp recovered.

Cooking Time is an unusual utility-type hyper that grows in strength as the game progresses. Unlike most hypers, Cooking Time heals all players similar to

Dinner, with the added bonus of awarding the user with stars for doing so. Given that the hyper heals up to the user's current level, the card gains much more power in the latter half of the game where its effect can be maximized. That said, the hyper's low price in the early game can be a viable method to a quick norma, if many players take damage from

Encounter panels or Air RaidAir Raid
Every 5 Chapters, all units will take 1 damage at the beginning of the Chapter. or BattlefieldBattlefield
Every 6 Chapters, all

Encounter panels. This effect lasts for 3 Chapters. event is active. In general, the hyper begins to become potent around norma 3, when powerful hyper/battle cards such as

Big Magnum become available for use. However, Cooking Time, reaches its peak strength at norma 4 with the arrival of

Boss panels, which can easily cause substantial damage to both the player and opponents. Assuming the player has successfully advanced their norma, both of these sources should provide the user with windows of opportunity they can exploit to gain a decent amount of stars. If timed well, the user should almost always be able to make a profit, even if it is only 5 stars. Additionally, the user should try to be missing 2-3 hp before activating the hyper, as this will cover most of the hyper's price. Besides a large star gaining play, the hyper does have other uses, however. If the player finds themselves in a tight spot, they can use the card as a make-shift

Pudding, or prevent an opponent from KOing another opponent to stop them from gaining points toward their win norma. The hyper can also be used to counter certain effect that prey on 1 hp opponents such as

Despite the hyper's multiple uses, it is not without its own issues- the primary being that its performance is almost entirely based on the opponent's performance. If the board lacks Encounter panels or is large enough to make battle difficult (such as Christmas Miracle), there may be few sources for the hyper to profit from. Similarly, if characters tend to be KO'd instead of surviving, there will also be few sources for the hyper to feed on. Another issue with the hyper is that it is relatively easy to counter. Given that the card is based on healing others, its greatest weakness is other healing cards. Pudding and Dinner can both erase a profit opportunity, and if an opponent uses

Mimic to get the hyper, it can completely ruin the user's chances of using the hyper effectively. Certain characters are also particularly unuseful toward the effect. Low hp characters such as Peat or Nanako will provide very little stars to the user, even at their lowest. Similarly tragic, despite her large hp pool, Kiriko is completely immune to the Cooking Time, neither healing or giving any stars to the user. Lastly, the rising cost of the hyper can make it more difficult to profit as, although the card heals more, it requires more damage to cover the cost. This results in the player needing

President's Privilege in order to circumvent the price and maximize the effect, which can serve as a minor inconvenience.