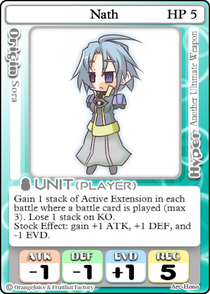 Nath (ナート Nāto) is one of the playable characters in 100% Orange Juice. She was added to the game in DLC 9 alongside Tomato & Mimyuu. Nath originates from the game Sora in which she was an antagonist.

Nath is a potentially powerful character constructed around a powerful passive ability: Active Extension. Unlike most characters, Nath requires setup and has the potential to become a deadly opponent at full strength. At the start of a match, Nath is extremely vulnerable, with stats almost identical to a Chicken with a higher health stat. As a result, Nath should generally avoid combat until the player draws a usable battle card or reaches norma level 2 to use other battle cards. The main advantage of the passive itself is that it rewards Nath for battle cards in combat and punishes/discourages the opponent for using them, as Nath will receive Active Extension for either players' use of battle cards. At each stock level, Nath will become more dangerous:

As to be expected, the main drawback of Nath is that if the player cannot get battle cards to level up her passive, she will spend the game as bullied character that most characters will be able to target for stars and wins. She also will lose a stock of Active Extension each time she is KO'd so it is important for the player to stay alive to keep the passive stocks.

Pros
+Highest combined ATK, DEF, and HP stats at 3 stocks of Active Extension
+Passive is triggered by both Nath and the opponent's battle cards
+Hyper has the potential to deal massive damage
+Passive ability is not completely lost when Nath is KO'd