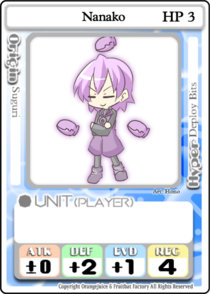 Nanako (ななこ Na nako) is one of the playable characters in 100% Orange Juice!. She was added to the game in DLC 1 alongside Syura.

Nanako is a character with excellent stats, featuring an increase in every stat besides attack and a reduced revive stat.

Cons
- Randomness of hyper's stat distribution can turn against her.
- Very vulnerable to

Reverse Attribute Field.
- Average attack stat makes her easy to pick on when she doesn't have her hyper. 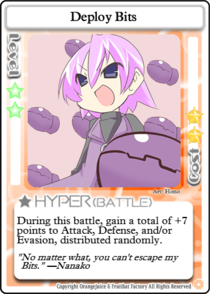 Nanako's hyper is Deploy Bits. When the Hyper is used, it causes a total of 7 points to be distributed at random to Nanako's Attack, Defense, and/or Evasion stats.

Deploy Bits gives Nanako surprise potential as her low HP and average attack make her a character who isn't as suited to fighting as to defending. The gains from her Hyper can alter the current battle depending on her fortune with the +7 overall stat distribution.

Be careful with using this Hyper at 1 HP, as any stat boost applied to Defense is effectively wasted. It is best to use this card while at 2 or 3 HP in an attempt to defend against strong attacks and/or steal opponent's stars.