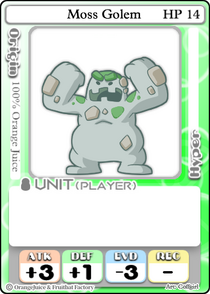 Moss Golem is one of the bosses on boards in 100% Orange Juice!. It is a special Boss that always replaces the usual Boss when playing Bounty Hunt Mode. However, it appears in Normal Mode as well. It was added to the game alongside the introduction of Bounty Hunt Mode.

Moss Golem is by far the most powerful Boss in the game, possessing the highest HP of all Bosses (even Big Poppo), as well as a whopping +3 ATK leaving it tied with Store Manager for the highest ATK of all Bosses. This, combined with its decent DEF, makes it a powerful force that is extremely challenging to KO.

Moss Golem is always the Boss when playing in Bounty Hunt Mode, replacing the standard Boss. In this mode, the player can acquire many tools from the various shops to help deal with it, whether through increasing stats or protecting from damage. However, Moss Golem is also able to appear as a standard Boss in Normal Mode on select boards. In Normal Mode, Moss Golem is very dangerous to contend with, able to use its high health stat to act as a damage sponge while retaliating with its high ATK stat. As such, players should do best to avoid Moss Golem unless they have made a plan beforehand.