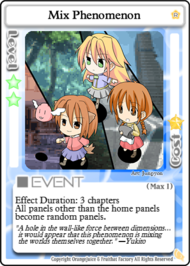 5
Symbol
30px
Illustrator
Junpyon
Rare Card
Mixed Pack
"A hole in a wall-like force between dimensions...It would appear that this phenomenon is mixing the worlds themselves together." —Yukito

Mix Phenomenon is a 2-star event card that replaces all panels on the board with random panels, excluding

Home panels. The number of each kind of panel is distributed evenly. The effect lasts for three chapters.

Mix Phenomenon is a card designed to counter the effects of panels that would otherwise be dangerous for the player to land on. The most common way to utilize it is to effectively disable a Boss EncounterBoss Encounter
When Norma level 4 is achieved for the first time by any player, all

Boss panels. While Boss Encounter is in effect, any player who stops on a Boss panel will battle the Boss unit. This event will continue until the Boss unit is defeated. or BattlefieldBattlefield
Every 6 Chapters, all

Encounter panels. This effect lasts for 3 Chapters. event for a few turns, making the board much safer for all characters. It can also be used to deny certain panels from other players, such as disabling warp panels to prevent someone who is low on health from getting away.