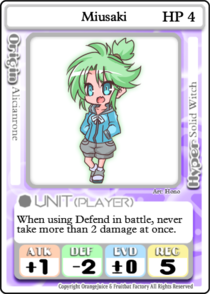 Miusaki (ミウサキ Miusaki) , also known as Miu, is one of the playable characters in 100% Orange Juice! She was added to the game in DLC 13 alongside Ceoreparque. She originates from the currently unreleased game Alicianrone in which her role is unknown.

A tomboy with a loud mouth and lack of grace, Miusaki is a chipper and spirited magical girl who's ready to play. Miusaki features a very unusual stat line with an average 4 health, a buffed attack stat, a heavily debuffed defense stat, and a standard recovery and evasion stat. As to be expected, the extra +1 to attack can be extremely useful in combat, and her neutral evasion stat can help her dodge low roles from wild units on

Encounter panels. The true hallmark of Miusaki that stands out above the rest of her stat line, however, is her passive. Similar to NoName, Miusaki is constructed around a passive that can make her extremely difficult to KO. When defending, she will only take a maximum of 2 damage and given that she has 4 HP, it will always take at least 2 battles to KO her without the help of effects that damage her outside of battle. Unsurprisingly, this can be extremely useful, Misuaki is immune to hypers that usually cause almost certain KO's like

Extraordinary Specs if she has at least 3 HP going into the battle. This also makes Miusaki a strong player in the late game, as she can survive the powerful attacks of bosses and opponents will be unable to KO the player on a home panel to get stars and win the game if Musaki has more than 2 HP. Better yet, even if the player's health is reduced to 2, they can easily put the health barrier back up through simple means such as landing on a

Heal panel, or recovering from a board effect like RegenerationRegeneration
Every 5 Chapters, all Units recover 1 HP at the beginning of the Chapter.. The ability to survive, compounded with Miusaki's hyper that makes her literally invincible, makes her a great, if not an unusual tank.

Despite her ability to survive where many characters would not, Miusaki is far from unbeatable. One of the key disadvantages of Miusaki is her defense stat which actively counterbalances her passive. Miusaki has the lowest defense stat in the game at -2, which means she is basically guaranteed to take 2 damage whenever an opponent attacks her with a strong roll. As a result, a steady stream of powerful abuse from bullies can take her down quickly under the right circumstances. Health is a very big deal for Miusaki, so simple effects like Air RaidAir Raid
Every 5 Chapters, all units will take 1 damage at the beginning of the Chapter. and

Mimyuu's Hammer become much more influential if the player is already damaged. Miusaki is also not quite as resilient as NoName, as neither her passive nor hyper protect her from KO effects.

Miusaki should more often than not try to aim for star norma and play passively unless the opportunity to attack a weak opponent presents itself. In the early game, the player should focus on

Bonus panels as the better the player's hand, the more prepared they will be for the later game. The player will want to have healing cards on hand at all times. 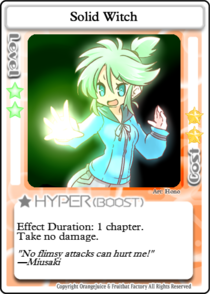 Miusaki's hyper is Solid Witch. When activated, it prevents the unit that played the card from receiving any damage for one chapter.

Solid Witch is a powerful hyper card that enables the player to avoid taking any damage for 1 chapter. Consequently, the card can be used for a mixture of both defensive and offensive purposes. For instance, the card can be used when the player is low on health and is either approaching or being chased by a high attack character such as Tomomo or Star Breaker. The hyper's activation will either force the opponent to pass the player or take the risk of attacking the player while invincible to stay behind them. The card can also be used to protect the player from

Boss panels in the late game, especially if HP is low. More importantly, the hyper makes a great counter to certain hyper such,

Delta Field if the opponent is trying to force the player into a losing battle. Given the protective qualities of Solid Witch, it can also be used for an attack. If multiple opponents are on the same panel nearby, the player can activate the hyper and all of the opponents without any risk of being KO'd (unless, of course, the opponent has

Self-Destruct). Solid Witch can also be used as a vicious combo with

Final Battle, with the former enabling the player to deal 2 rounds of risk-free damage and the latter ensuring the user will win the fight no matter what.

Solid Witch is not an invincible barrier, however, and arguably one of the hyper's greatest disadvantage is that it is a boost card. Unlike most protective hypers like

Stealth On it is not a stock effect and its duration is extremely short. Subsequently, opponents behind the player can just wait for the effect to end, and if the player is trying to use it offensively, they may fail to roll high enough to reach their target. Thus, if the player fails to time the hyper well, it can easily go to waste. The biggest issue with Solid Witch, though, is that it actually does not protect the player from everything. The hyper can only block damage dealt in combat or cards that deal damage outside of combat. Cards that KO a player and cards that change the target's HP directly still penetrate through the shield granted by the hyper. Solid Witch does not block the effects of: