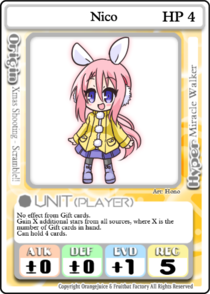 No effect on Gift Cards. Gain X additional stars from all sources, where X is the number of Gift cards in hand. Can hold 4 cards. 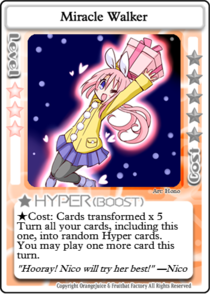 - Every Gift card you have unlocked!

- Nico is arguably the best Mimic user in the game as of now. After using Miracle Walker to get a handful of random Hypers, you can draw a Mimic from the deck & turn them all into a handful of another character's Hyper!

- Scary Solicitation can drain her stars very quickly if she has 1 or 0 cards in hand.

- Flamethrower & Present Thief are also useful against her. Especially if she used her Hyper, or if she's holding onto multiple Gifts.

- Flip Out can be used effectively against Nico if she ends up obtaining stars early due to Gift card hoarding.