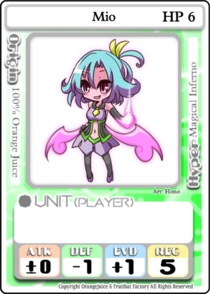 The self-proclaimed "mama" of Tomomo and the one who made her a magical girl, Mio is a smug magical devil, eager to torch opponents just for fun. Mio features a unique stat line, with a high health stat of 6, a slightly below-average defense stat, and a buffed evasion stat. Mio is rather unique in that she is the only character with 6 HP and a positive evasion stat, and thus has the advantage of being able to dodge low opponent rolls more easily than similar units, instead of burning through her health supply. Despite this advantage, Mio is generally not favorable for aggression, given her lack of an attack buff. Consequently, the player should usually focus on

Bonus panels and star norma to achieve victory, which will also aid the player in feeding Mio's powerful and extremely expensive hyper,

Magical Inferno. Most advantageous to the player, Mio sports one of the strongest hypers in the game that under the right circumstances can dominate the opponents.

Like all characters, Mio possesses some key flaws. Mio's biggest flaw is that she lacks survivability and can be bullied easily by opponents. Even with her 6 HP pool, her negative defense does little to protect it. Opponent battle rolls of 5-6 will likely take a substantial chunk of her HP in each hit. Likewise, her +1 EVD stat is fickle. The minor evasion buff encourages dodging but is unlikely to protect her from high rolls and may cost the player precious health points if they roll poorly. As a result, Mio's hyper is often more likely to be spent recovering the stars the opponents have beaten out of her. In general, Mio needs her hyper card to make any kind of "power play", as her stats do not enable her to. 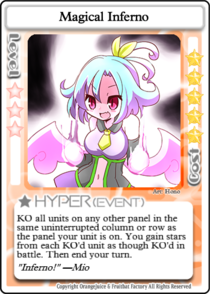 KO all units on any other panel in the same uninterrupted column or row as the panel your unit is on. You gain stars from each KO'd unit as though KO'd in battle. Then end your turn.
Hyper Info
Effect Type
Event
Level
3
Cost
50 ★
Symbol
[[File:|30px|link=]]
Illustrator
Hono
"Inferno!" ―Mio

Mio's hyper is Magical Inferno. When activated, Magical Inferno will release a blast of fire that will KO all opponents in the same uninterrupted column or row of panels as Mio and give Mio half their stars but no wins. The player's turn will then end. (An opponent is required to be in striking range for the hyper card to be activated. The fire has to run on a straight line of panels with no gaps to hit the opponent and it cannot hit opponents on the same panel as Mio.)

Magical Inferno is a brutally powerful hyper, that can be used as a deterrent, a powerful weapon to take out many players, or a sniping tool for the opponent currently leading the game depending on the situation. The hyper is unique in that it is the only card that can both guarantee a KO and takes half of the opponent's stars as if a battle occurred. Similar to

Special Stage, this ability gives the card a potentially massive star payout depending on the timing of the card. At best, the player can KO all the opposing players, giving them well over 100 stars and easily paying off the price of the card. A well-timed Magical Inferno can essentially "remove" certain opponents from the game by setting them far behind in the later chapters of the game, especially if they fail their recovery roll multiple times. In the right circumstances, the card can steal victory from the lead opponent, render them unable to fight back, and enable the player to win instead. The card also works as an excellent deterrent once the player reaches norma 3. Most opponents, if they cannot reach Mio, will choose disadvantageous paths to prevent themselves from standing next to Mio. Overall, with the right timing, and a bit of luck, Magical Inferno can reap massive rewards for the player.

Magical Inferno has 3 key disadvantages that prevent the card from being impossible to win against. As previously stated, the card cannot strike over gaps. As a result, the hyper's performance is inconsistent based upon the board. On a board like Highway Heist and Dark Citadel the hyper may dominate thanks to the prevalence of straight lines. However, on a board like Santa's Workshop the card's power will be nullified and it will practically be a weaker version of

True White Christsmasher as the player will more often than not only be able to strike the opponent on the panel next to them. The player may also just never be lucky enough to have an opponent line up with Magical Inferno, even on boards where it should theoretically be easy to accomplish. The second and most obvious problem with Magical Inferno is its price. While other hyper cards can match or beat the price of Magical Inferno overtime, Magical Inferno has the most expensive base price of any hyper at 50 stars. This can make it extremely difficult to make a star profit until very late in the game. The issue can be mitigated with

President's Privilege, but doing so will also add an extra pressure on the player to reach norma 4 before activating the card. The last major disadvantage of the hyper is that it cannot be used on opponents on the same panel as Mio. Consequently, opponents will likely attack the player if given the choice to pass them, as doing so will keep them safe from Magical Inferno. Likewise, if the player is being actively attacked by a bully, their only hope is that they move further than the attacker on their next turn to get the opponent in range of Magical Inferno.