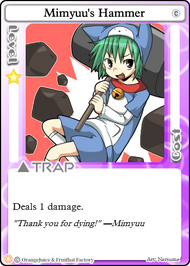 Mimyuu's Hammer is a 1-star trap card that deals 1 damage to the player that lands on it.

Mimyuu's Hammer can be a real pain for characters with lower health pools, making it a dangerous card for characters like Peat or Nanako. Players weakened by this trap can become easy pickings for offensive characters like Kai and Yuki. Mira in particular gets some extra mileage out of this card thanks to their smoke passive, allowing them to more easily catch up to the now injured opponent. Natsumi can use this card to deal small amounts of damage to opponents in order to get more stars from

As with all trap cards, a player must land on it in order for it to be effective. There is always a chance that opponents will be able to avoid the trap, effectively making it a dead card. The damage Mimyuu's Hammer deals is very minor, and can quickly be negated by a

Saki's Cookie, or a number of other cheap healing effects. Characters with large health pools like Arthur or Marie Poppo can easily shrug off the damage from this trap. If the victim is KO'd, they only lose time while trying to revive and the setter of the trap does not receive anything. Passive characters like Aru have more impactful options for traps, preferring control options such as

Bad Pudding due to the difficulty they have taking advantage of weakened opponents. Even offensive characters are generally better off putting

Long-Distance Shot in their decks, as they can control who gets hit and when it happens.