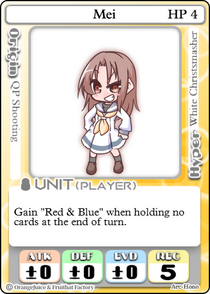 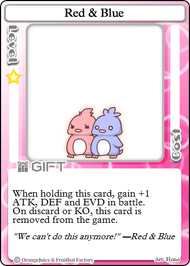 When holding this card, gain +1 ATK, DEF and EVD in battle.
On discard or KO, this card is removed from the game.
Level
1 ☆
Cost
0 ★
Limit
∞ per Deck
Deck Points

Mei (メイ Mei) is one of the playable characters in 100% Orange Juice!. She was added to the game in DLC 18 alongside Natsumi.

An antagonistic and extremely competitive girl, Mei is always ready for a fight with whoever she deems as her nemesis, with the help of her penguins Red & Blue. Mei herself is a balanced character with a slightly below-average health stat and a neutral evasion, attack, and defense stats. However, she can lean towards being aggressive thanks to her unique passive, similar to Tsih. Whenever Mei has no cards in her hand, she will draw 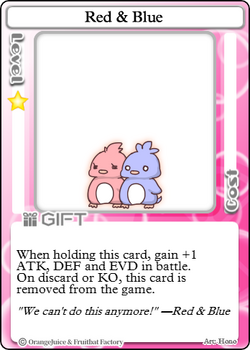 , the most powerful stat-boosting gift card in the game, providing +1 to her attack, defense, and evasion stat as long as the card is held. This is extremely powerful, as it provides the player with completely positive stats and durability that is unequaled by rivaling attack characters such as Sora and Marc. Unsurprisingly the player should try to get Red & Blue the earliest they can, to keep Mei as strong as possible for as long as possible. If the player is lucky, this can sometimes be accomplished by starting with a zero cost card they can play immediately, like

Flip Out. This need to zero out the hand also makes Mei one of the few characters who can benefit from

Scrambled Eve, as she will always get Red & Blue back after its activation. With a bit of luck, she can even draw the one sent back to the deck, providing her with two copies of the card. Once the player has the gift card, Mei will generally not have much difficulty defeating

Boss panels, as her attack will either be enough to defeat the opponent or her defense and evasion will protect her from both high and low rolls. As a result, depending on the player's performance, they can use Mei to fulfill either norma as she can fight well or defend herself and collect stars. Also, if the player has Red & Blue, in their hand, while Mei has her hyper in hand, the player will have access to a powerful hyper than can be used to punish players for coming near her.

The inherent disadvantage of Mei's kit is her reliance on

. Without the card, Mei is a weaker QP that should avoid battle, and if Mei is KO'd the player will lose the card. This means unlike most of the cast, the player will generally want to keep a very small hand at all times in order to get the card back should they lose it. However, this may not be possible, especially if the player is holding cards like

For the Future of the Toy Store which can be very hard to discard. This can also make it very hard to plan a powerful play for Mei, as the player must always plan to be able to empty their hand in a moment's notice if they must. Consequently, Red & Blue is also an inconvenience. Since it must always be held to reap the full benefits of Mei, the player will only really have 2 card slots to work with instead of 3. Likewise, if the player loses Red & Blue, Mei's hyper also becomes substantially worse and will often need to be used just to remove it from the player's hand. In short, discarding Red & Blue will set the player back in the game and it may be quite hard to make a comeback after it is lost. Thus, while Mei can battle with the likes of Star Breaker the player should try to distance themselves from powerful bully characters when their hand is full to avoid losing Red & Blue.

As previously stated, Mei can potentially play for either wins or stars dependent on how well the player rolls and if they get her passive gift card quickly. If the player is lucky enough to get the gift, do well on

Encounter panels, and KO an opponent with her hyper, then wins can be viable. If RNG is not on the player's side, however, her stats should support her well enough that the player can collect stars in peace and counter-attack well in response to opponents. Overall, Mei is used for star norma more often than not, but wins norma can sometimes be used for norma 2 and 3 during the course of the game.