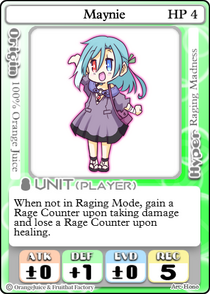 Maynie (メイニー Meinī) is one of the playable characters in 100% Orange Juice!. She was added to the game in DLC 28, alongside Arnelle.

Maynie is a very powerful character when she has high stacks of Rage Counter and uses her hyper. She has below-average HP, but has +1 def, making her somewhat a tanky character. Her stats are made to be passive; her defense encourages to stack the Raging Mode faster, eventually turning her to be the most aggressive character than any other when she activates her hyper. Additionally, even if she gets KO'd while her hyper is active, unless the targeted character dies, her buffs are preserved forever. Her unique skill, Rage Counter, increases as she take damage, but decreases when she gets healed by any means (card, home panel, healing panel, event). Note that when she gets KO'd, Rage Counter will not disappear. However, her somewhat high REC would possibly make her unable to be revived quickly as she has to be KO'd to stack Rage Counter.

Maynie needs to not only draw a hyper card but also she needs to have a lot of Rage Counter to make her hyper very powerful. She can easily stack Rage Counter by taking 1 damage, ensuring she would get at most 4 rage counter for each time she dies (unless she uses Portable Pudding). Challenging a character with average or below-average attack stat is favorable than purposely challenging bully characters. Encounter panel is another way to stack it since most mobs except seagull has -1 attack, meaning you can intentionally defend to take 1 damage with high possibility. Try to avoid stepping on a home panel when your HP is not full (unless you want to norma) as when she gets healed, her Rage Counter will be reduced by 1, delaying her use of her hyper.