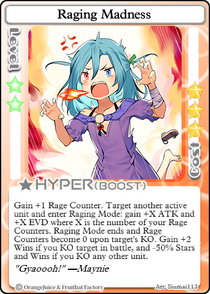 Upon usage of the Hyper, the targeted opponent will experience no immediate effect, simply becoming tied to Raging Mode's specific effects and ending condition. After selecting a target, there will be no indication to any player regarding which opponent was targeted.

The player can still gain one stack of Rage Counter while in Raging Mode by using the hyper again. The stack gained from using it a second time will be added to Maynie's current Rage Mode stacks. The target selected by the first Hyper will be overwritten by the target selected by the second usage of the Hyper, changing Raging Mode's effects and ending condition accordingly.

Upon usage of Raging Madness, the game's music will be replaced by Maynie 2. If the player is Maynie, her sprite will be changed to use the 2 pose (Attack) in place of her 1 pose (Default), 4 pose (Success), and 6 pose (Dice Throw) for the duration of Raging Mode.