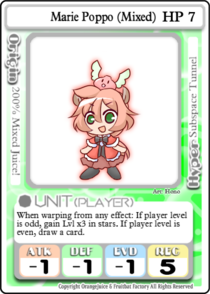 For the alternate version see: Marie Poppo or Big Poppo.

Marie Poppo (Mixed) (まりーぽっぽ (ミックス) Marī Poppo (Mikkusu)) is one of the bonus characters in 100% Orange Juice!, unlocked by owning the game 200% Mixed Juice! on Steam.

Here and There, which will not only be useful to get to safety or keeping opponents from finishing Norma, but also plays for itself in form of star generation and card draw due to Marie Poppo (Mixed)'s passive.

Marie Poppo (Mixed) also shares the weaknesses of the normal Marie Poppo: Despite having a great health stats, she overall suffers from below-average stats in everything else. This means that she starts every combat handicapped and normally causes her to avoid encounters unless absolutely necessary. On the flip side, this obviously causes

Reverse Attribute Field to be an exceptional combat tool, often even weakening the opponent while putting yourself in a very battle-friendly position.

Since she has high health and bad combat stats, Marie Poppo (Mixed) is much happier collecting Star Norma as her preferred option for victory, running away from potential danger whenever the opportunity arises. While she can hop into combat for a cheap shot against opposing players with 1 health, this is normally done to gather more stars rather than finishing Normas via wins. Technically Marie Poppo (Mixed) works equally well on any stage, but due to the nature of her passive, she highly profits from warp-heavy stages like Witch Forest.

Cons
-Poor combat ability and easily bullied
-Hyper can put the player into dangerous situations, since it warps randomly
-Additionally, her hyper can also help the opponent getting closer via Warp panels