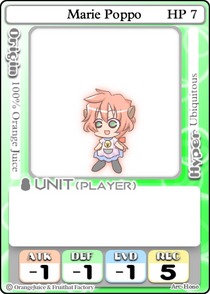 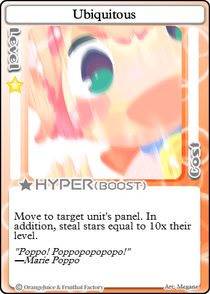 Poppo's Hyper is Ubiquitous. When used, the player will be prompted to target a non-KO'd opponent. Upon doing so, the player will warp to the target's current panel and steal stars from them equal to 10x the norma level of the target.

Ubiquitous is a very powerful Hyper card with the potential to "steal" victory from another player. Unlike most Hypers, Ubiquitous is a no cost card with a level 1 activation price with guaranteed star gains. Against a level 5 player, the Hyper will steal 50 stars from them, which can easily be the single deciding factor in the outcome of a game. Alongside the guaranteed star gain, Ubiquitous can also act as an amazing utility, as it grants the player controllable repositioning on the board. If the player is in danger from a threatening opponent, the Hyper can teleport them into a safer position, possibly closer to their home base.