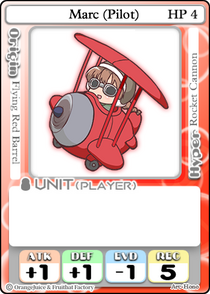 For the alternate version see: Marc.

Marc (Pilot) (マール（パイロット） Māru (Pairotto)) is one of the characters in 100% Orange Juice!. She is available as a playable unit for owners of Flying Red Barrel. 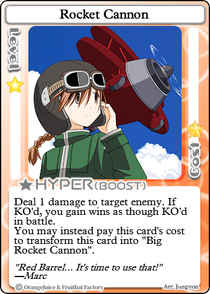 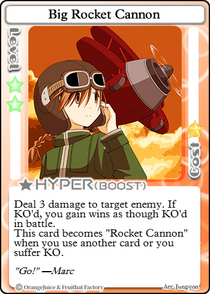 Deal 3 damage to target enemy. If KO'd, you gain wins as though KO'd in battle.
This card becomes "Rocket Cannon" when you use another card or you suffer KO.
Hyper Info
Effect Type
Boost
Level
2
Cost
10 ★
Symbol
[[File:|30px|link=]]
Illustrator
Junpyon
"Go!" ―Marc

Marc (Pilot) has two Hypers, which will transform into each other depending on certain criteria.

Marc (Pilot)'s main Hyper is Rocket Cannon. This card has multiple methods in which it can be used. The card can either be used normally, or the player can use the card's alternate effect by clicking on the

button above the card.

This card has varying effects depending on how it is used.