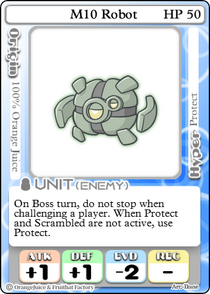 M10 Robot (M10ロボット M10 Robotto) is a special super-powered boss only found in Co-op mode. It was originally introduced during the Minions of the Master event in 2019 which also introduced the mode as a permanent game mode. 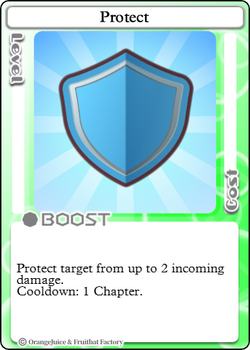 . When used, it will negate any stack of 3 damage down to 1, making any significant damage dealt in battle minor. Furthermore, its passive allows itself to build up attack quickly on small boards or boards with a lot of

Move. This can be especially dangerous if paired with 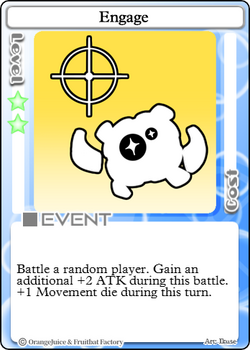 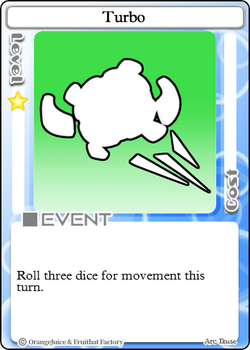 . M10 Robot has plenty of debuff cards that are detrimental to the players in many different ways. With these cards M10 can debuff the team's base stats and buff itself in the progress, reduce the players' health, disabling the ability to play cards, or amplify either the player's or its own dice. As such, finding the perfect opportunity to strike is much more important to a team's victory than other bosses.

The main difficulty of fighting M10 Robot is its shield and the sheer number of debuffs it causes. It is recommended to try to keep its Protect stack at 1, then discuss with the whole team to find the perfect opportunity to bring down the shield, and assault it. Cards that do damage outside combat such as

Cloud of Seagulls are highly recommended to break down the shield. Players will find characters with zero recovery time such as Shifu Robot more valuable to the team, as they break down the boss's shield rapidly, allowing other teammates to launch a devastating strike on it. They also suffer from nearly no harm from 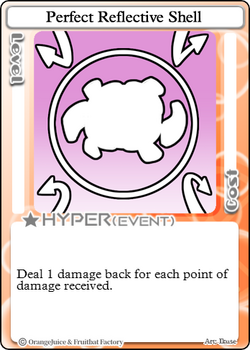 . Have the whole team timing and discussing when to launch the strike is also important, for example, breaking down its shield while there is an 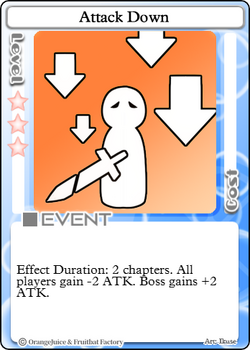 coming is generally not recommended. After its shield is down, Scrambled will take place for 3 chapters, lowering its stats and renders its ability to negate incoming damage. Should the team make the most out of this event, they can easily achieve victory.