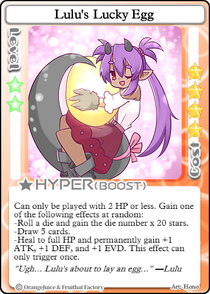 Lulu’s hyper is Lulu’s Lucky Egg. When activated, the player will receive 1 of 3 effects at random:

Lulu’s Lucky Egg is an unusual low-level hyper that when activated gives the player 1 of 3 randomized effects, rather than offering a single effect like most hyper cards. Subsequently, this provides the player with 3 potentially useful bonuses in the form of either stars, cards, or a full heal and permanent stat buff. While the randomness of the effect renders the hyper unreliable by nature, much like

Deploy Bits, the player can almost always benefit from the result. If the player receives the star 20x effect, the player will profit on a roll of 3 or greater or break even on a roll of 2. This means the player has an 83% of not losing stars and a 67% chance of making a profit of at least 20 stars. If the player is lucky and rolls a 5-6, the star boost can give the player a massive lead over the rest of the board. If the player instead gets the card draw effect, the 5 cards drawn can either fill an empty hand or provide the player with quick access to more options, and perhaps even a second hyper card to try again for another effect. The third and final effect, however, is by far the best bonus and one of the strongest card effects in the game. When received, the player will be healed to full health and receive a permanent +1 in all stats (not including hp). Although it can only be triggered a single time, this effect is incredible, as it can provide the player with a deadly stat line, unrivaled by most other characters. In the case of Lulu, the card gives her a powerful +1 attack, +2 defense, and an evasion stat of +1 that enables her to both attack and defend with ease. Likewise, the full health recovery essentially gives the player the effect of

Pudding 2 levels early, depending on when the hyper is used, and immediately enables the player to take advantage of the stat buffs.

Like all hyper cards, however, Lulu’s Lucky Egg has its own complicated issues. Firstly, while the hyper is low-level at a 2-star requirement, it is very expensive at its 40 star price tag. It can also be challenging to activate since, unlike most hyper cards, which only have a star price and level requirement, Lulu’s Lucky Egg requires that the player is at 2 hp. Consequently, the 2 critical problems the player will face are their hp after the card activation and potential star loss. In any case but the stat buff, the player will only have 2 hp, which can be very dangerous if an opponent is close behind. Given the potential difficulty of fulfilling the hyper’s activation criteria, the card is risky given that 2 out of 3 of the effects may backfire. If the player rolls a 1 or 2 for stars, they will either lose stars or essentially waste the hyper, the latter which may be the only hyper they draw during the game depending on luck. Even if the player does profit, however, a close-by opponent may be able to quickly KO the player to steal the gain. Similarly, although drawing 5 cards is a good effect, it is generally seen as the worst effect offered by the card, as it will put the player behind a sufficient number of stars and may not even yield good cards, depending on what other players have packed. In the worst-case scenario, the player may get the 5 card draw effect, receive another hyper and get the 5 card draw again, resulting in an 80 star loss. While the risk involved with the card can technically be minimized with

President's Privilege, the level requirement for the card will result in the player needing to wait much longer before activating Lulu’s Lucky Egg.