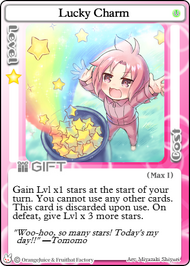 Gain Lvl x1 stars at the start of your turn. You cannot use any other cards. This card is discarded upon use. On defeat, give Lvl x 3 more stars.
Level
1 ☆
Cost
0 ★
Limit
1 per Deck
Deck Points

Lucky Charm is a 1-star gift card that gives the player stars at the beginning of each of their turns, but prevents them from playing any other cards for as long as they hold it. If this card's holder is defeated in battle, they give additional stars to their opponent, in addition to the normal loss of stars.

Lucky Charm is great card for players looking to complete star normas. It supplies it's holder with stars at a faster rate than their opponents for as long as they can hang on to it. Due to the increased penalties on a combat loss, it is important to know when to drop this card in order for the player to avoid potentially losing a large portion of their stars. Therefore, if the player wants to hold on to Lucky Charm for as long as possible, they should make it a priority to avoid other players as to avoid unnecessary fights.

On the flip side, holding this card also makes the player more of a target for other units. If defeated in battle, opponents will gain an even greater star advantage than usual, especially if the player's norma level is high. Characters susceptible to being KO'd many times like Chicken or Tomato & Mimyuu should drop this card if other players are around. In addition, for as long as the player holds this card, they cannot play any other cards. This can make this card very risky for characters that rely on defensive battle cards like Alte or Robo Ball, as they will not be able to defend themselves if an opponent suddenly initiates combat against them. Lucky Charm is one of the few gift cards that Nico may not want to bring to the game, as it allows her opponents to keep up with her enhanced star collection.