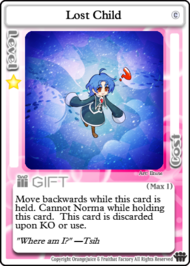 Move backwards while this card is held. Cannot Norma while holding this card. This card is discarded upon KO or use.
Level
1 ☆
Cost
0 ★
Limit
1 per Deck
Deck Points

Illustrator
Ikuse
Common Card
Community Pack
"Where am I?" ―Tsih

Lost Child is a unique gift card that while not very powerful, can aid the player in a multitude of ways. When held, the card causes the player to move in reverse for all movement actions. It also prevents the player from receiving norma on

Home panels, as long as the card is held and will be automatically discarded when the player is KO'd.

Lost Child is a very unusual gift in that it has no explicit purpose, however, it is clear that the card is only meant to be used temporarily. As its use is not specific, the card can work in a variety of cases. Bully characters like Star Breaker can potentially use it to catch up to far away opponents on any size board and likewise star collecting units like Aru can use it to allude bullies. The card can also enable the user to take shortcuts on certain boards by accessing panels they normally couldn't like some of the

Warp Move panels on Sweet Heaven and the center area of Shipyard. A more common use for the card is a somewhat specific scenario. If a player has the stars/wins necessary for the next norma, has just left their

Home panel and moved onto a

Draw panel in which they draw Lost Child, they can simply walk back past their home, drop the card, and norma again when they move forward back onto their home. This enables the player to norma twice without circling the entire board, which can be beneficial on very large boards. This can be very impactful to the game result if this tactic is used for the player's final norma. In terms of synergy, Lost Child only pairs extremely well in a few cases. The first is, of course, Tsih who can use the card to trigger her passive ability. Ideally, the player can then use the reverse movement to pursue the incoming players. The second pairing is a very unusual scenario that is possible but unlikely to occur. If an opponent lands on a home panel with enough wins or stars to norma and Arthur has marked it with

Rbit Hobby Shop, if the opponent draws Lost Child it will render the opponent unable to norma that chapter. This can be extremely effective if it denies the opponent the final norma to win, but it is a rather unreliable strategy.

Like most gift cards, Lost Child's main weakness is that the card is generally not particularly impactful to the game result except in a few cases. Further, the fact that it prevents norma and drops on KO makes it impossible to keep for a long period of time. The card may also delay the player by forcing them to walk past their desired panel and drop the card then walk back toward the desired panel. The player will likely just use it for a couple of chapters until they grow bored of it or need to norma and then discard the card.