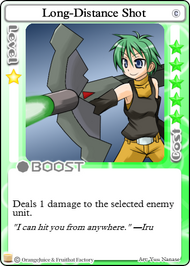 Long-Distance Shot is a 1-star level boost card that enables the player to target one unit and deal a single point of damage. The user cannot target themselves or units that are KO'd.

Long-Distance Shot gives the user the ability to deal a single point of damage from anywhere on the board. While simple in nature, this effect can be extremely useful in the right scenario. As a result, the card actually can be used much more tactically than it would lead on and should be used to maximum effect if possible. One damage can mean the difference between an opponent surviving and suffering a KO, especially for tank characters like Fernet due to their generally high DEF and low EVD. Long-Distance Shot is almost a necessary card for Iru, as it lets her assassinate any unit in her attack range as long as they are at 2 HP.

Characters that depend on having low health will be at a sizable disadvantage if Long-Distance Shot is available in the deck. Syura, Kiriko, and Alte will all have trouble using their respective hypers at the time when they are most powerful. A common mistake is to use Long Distance Shot to KO an opponent who is at 1 HP just because the player can. If the player simply uses it to KO for the sake of it, the opponent loses nothing but recovery time. Their stars will not be affected and their health will be restored when they recover. This isn't to say that the player should never KO an opponent with Long-Distance Shot. It can be useful for denying bully characters when their prey escapes with low HP. Otherwise, the player should only use the card to KO if there is no way to initiate battle with the opponent before another player can defeat them or they reach a