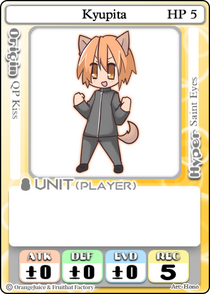 Kyupita (きゅぴた Kyūpita) is one of the playable characters in 100% Orange Juice!. He was added to the game in DLC 29, alongside Chris.

Similar to QP, Kyupita possesses average stats across the board, with 5 HP and neutral ATK, DEF, and EVD. Despite these underwhelming stats, his strength relies on his unique Hyper card, which can be used to boost his ATK and DEF. The stacks will not be depleted if he gets challenged by other players (Note that his stats will be neutral), which allows him to stack the effect multiple times provided that he doesn't step on

Even though he may be powerful when he has high stacks of the counter, his greatest weakness is his vulnerability when challenged by other players. Like Flying Castle, bully characters would easily defeat him when they're behind Kyupita, and it will be tough for him to avoid being chased. In addition, he is very hyper-reliant even in ideal scenarios.

Kyupita will need to play passively and generally need to aim for star norma, as he isn't suited to KO other players initially. The player would want to focus on the draw panel and ensure that he can stacks his Hyper as much as possible. When he possesses high stacks of Saint Eyes, he should pursue other players who have a high amount of stars.

Pros
+Balanced stats
+Powerful Hyper: Saint Eyes can be stacked infinitely for massive stat boosts
Cons
-Card reliant for KOs
-Vulnerable when on the defending side
-Reverse Attribute Field can put him into disadvantage if he has Saint Eyes stocks
-Maps with Battlefield effect can quickly deplete his Saint Eyes stocks