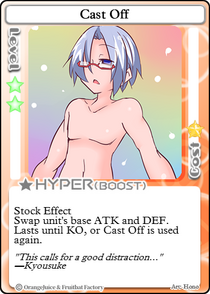 Cast Off gives Kyousuke the ability to play as two different characters at once: A passive version that defends against attacks as well as Fernet, and an aggressive version that lets him attack opponents as well as Yuki and Tomomo. The key to making the most of this Hyper is to switch according to the situation, usually to attack someone who may not be able to retaliate against the aggressive version, like Marie Poppo, another Kyousuke, or someone who is low on HP. Cast Off goes well with

Super All-Out Mode, as long as you don't accidentally get involved in a battle before you can Cast Off, you can swap your stats up to +4 ATK and -1 DEF.