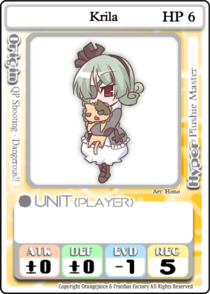 Krila (クリラ Kurira), full name Krilalaris (クリララリス Kurirararisu), is one of the playable characters in 100% Orange Juice!. She was added to the game in DLC 4 alongside Kae.

Krila is a rather unusual unit featuring pseudo-tank characteristics. While featuring an extremely high health stat and below average evasion stat, Krila does not have an increased defense stat or decreased attack stat, typically attached to tanks such as Fernet or Kyoko. Like most tanks, Krila's health enables great survivability in combat, however, contrary to most tanks, she is able to attack other players without the fear of likely rolling a 1.

Krila's main disadvantage is her reliance on her Hyper card and below average evasion stat. With her reduced evasion stat it may be more difficult to survive when Krila is low on health. Krill's Hyper reliance in particular is her weakest aspect as without her Hyper, Krila does not have any attack modifiers or ways to win against most opponents. 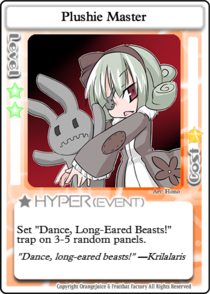 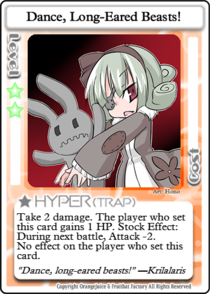 Krila's hyper is Plushie Master. When the Hyper is used, it causes 3 to 5 Dance, Long-Eared Beasts! to be placed randomly on the field. Landing on the trap card does 2 damage to any opponent that lands on it, inflicts a stock effect that reduces the opponents Attack by 2 for their next battle, and increase Krila's Health by 1 (It can push her over her maximum HP) If Krila lands on her own trap, her hyper will activate, but will have no effect.

Plushie Master is a unique Hyper boasting a powerful chain effect and a cheap star price. At its low price of 10 stars, there is little to no benefit for the player not to use the Hyper immediately, so long as Krila still meets her Star Norma requirement. Similar to

Star Blasting Fuse, the player's main goal in a match should be to collect as many Plushie Master cards as possible to bombard the board with traps. As to be expected, the more Dance, Long-Eared Beasts! that are present on the board, the more likely opponent's will land on one. The resulting effect is a gain in health for Krila and a harsh health and attack reduction to the victim, rendering the opponent weaker as Krila becomes stronger. Under the right circumstances, Krila can achieve health of well over 12.

The main drawback of the Hyper is that

Dance, Long-Eared Beasts! is a trap card. As spawned trap cards, they are placed randomly and have no particular placement strategy applicable to them. Thus, the Hyper is completely opponent-reliant and may not cause any damage for multiple turns, if the opponent does not land on a panel containing one. Krila may also land on her own trap as well, which, while not dealing any damage to herself, essentially wastes the card. The opponent can also see and memorize which traps are Krila's, however, this can be fixed with card such as

We Are Waruda to confuse the opponent. The other challenge to the Hyper is that the player needs multiple of them for the best effect, which may be difficult to accomplish as there are only 8 in the deck. The player can boost their odds of finding a Hyper with

Passionate Research, but if the player is unlucky they may be unable to draw a Hyper for most of the game.