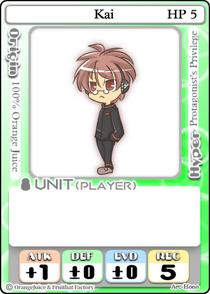 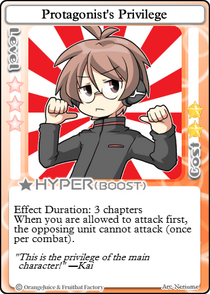 Effect Duration: 3 chapters
When you are allowed to attack first, the opposing unit cannot attack (once per combat).
Hyper Info
Effect Type
Boost
Level
3
Cost
20 ★
Symbol
[[File:|30px|link=]]
Illustrator
Neriume
"This is the privilege of the main character!" - Kai

Kai's Hyper is Protagonist's Privilege. When used, if the player attacks first in battle, the opposing unit will skip their attack roll. This effect lasts for 3 chapters.

If the player attacks first in a battle with multiple rounds of combat (due to effects such as Little War), the opponent will only skip the first round of combat.

If Protagonist's Privilege is used while it is already in effect, the effect itself will not stack, but the duration will be refreshed.

Protagonist's Privilege is an unusual Hyper in that it has no blatant damaging or protective effect on its own, relying solely on combat to activate it. While not particularly powerful on its own, the main advantage of Protagonist's Privilege is that it enables the player to take risks and remain safe while doing so, as long as they strike first. For example, the player will be able to enter a

Boss battle with 1 HP and leaving unharmed, as the boss will not get to attack. This method of shielding against the boss is a very common use for the Hyper and is advisable in multiple scenarios. Or in another situation, if the player is pursuing a low health opponent, they can keep attacking the opponent until they are KO'd without the chance of being KO'd themselves. To get the best results out of the Hyper, the player should generally activate later in the game to help them defeat the boss or weakened opponents, and then possibly pair it with a battle card. Using

Despite its advantages, Protagonist's Privilege has its flaws. Firstly, the Hyper is not cheap at a cost of 20 stars, and using powerful combos to bring the card to the maximum potential will often cost the player around 50 stars. Thus, using

President's Privilege is beneficial in lowering the cost but will result in the player using their entire hand to make a combo, leaving them vulnerable if an opponent approaches, especially in the late game. Thus, it may be in the player's best interest to mainly use the card for the Boss. The second and most blatant issue with the card is that unlike other Hypers, it does not do anything, as in it does not deal damage or steal stars on its own. If the player wants to take advantage of the Hyper, they can only do so through the course of raw combat, not a "super card" that automatically does the heavy lifting for them. Lastly, the most obvious weakness is that Kai must attack first to get the benefit from the effect. As a result, the Hyper lacks usefulness when all opponents are behind Kai and leaves a massive window open for the opponents to assault the player even when the Hyper is active. 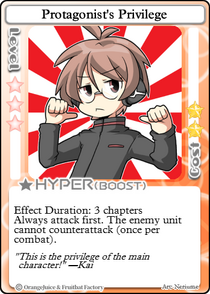 When the player begins a new game and selects their starting main character, they will receive the cards necessary to create a deck. If a player chooses Kai as their starting character, they will begin the game with the provided 15 cards along with Kai's unit card and hyper card. In concurrence with Kai's stats, Kai's starting deck is relatively combat based, with it containing mostly stat adjustment cards to aid Kai and weaken his opponents.