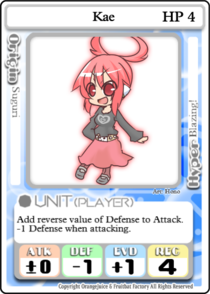 Kae (カエ Kae) is one of the playable characters in 100% Orange Juice!. She was added to the game in DLC 4 alongside Krila.

Add reverse value of Defense to Attack. -1 Defense when attacking.

Armed with a childlike personality and a love for burning, Kae is a glass cannon like no other, dealing lots of damage but being taken down swiftly. Upon initial appearance, Kae is rather unimpressive, possessing a relatively frail build similar to Saki, which sports an average health stat, below average defense, and a decreased recovery and increased evasion stat to help her survive and get back to playing sooner. Kae's true strength, however, is derived from her tricky passive ability that can enable her to deal massive damage with little to no effort. Her passive is broken into two parts. The first passive ability adds the inverse of her defense stat to her attack stat giving her a natural boost of +1 attack. When coupled with her second passive effect, which decreases her defense stat by 1 when attacking, Kae receives a natural boost of +2 to her Attack stat when she initiates a battle. This means Kae should always aim to strike first to get the +2 to her attack stat, but she will still have the benefit of a -1 defense stat when being attacked by an opponent as opposed to a -2. The key advantage of this passive is that enables Kae to have some of the cheapest card combos that yield fast and powerful results. Cards such as

Rainbow-Colored Circle will give her a +3 attack and +3 evasion stat to effectively attack and dodge, while

I'm on Fire! can push her attack stat to +4 with a level 1 battle card. The passive also makes traps like

Heat 300%, which are normally very detrimental to fragile characters, potentially extremely useful to powering up Kae. Kae also has the advantage of a very cheap hyper that will further augment her abilities for multiple chapters.

The main downside to Kae is that her build is somewhat paradoxical. Kae is extremely frail as a result of her below average health and defense stat but she needs to constantly initiate battle to take advantage of her passive. However, without her passive, she is fragile and with her passive active, she is likely to be KO'd if she fails to KO the opponent in one hit as her defense will be very low. In short, Kae's weakness is that she can dish out damage but can't handle returning fire from opponents. If the player rolls poorly on Kae's lackluster evasion stat or does not have good combo cards, she will likely go down quickly. Kae's need to attack first also causes issues, as this means the player will need to try and stay behind the other players during a match which can be problematic depending on the board, the player move order, or how well the player rolls for movement. Kae also shoots herself in the foot when using defensive cards such

Rbits, since it will lower her attack stat into the negatives during the battle. Thus the player will need to consider how desperate they are to survive before using a defensive card. 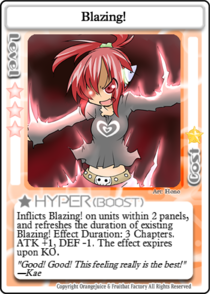 Kae's hyper is Blazing!. It inflicts a stock effect that adds 1 attack and subtracts 1 defense on Kae and every opponent within 2 panels (this includes diagonal) from Kae. This stack lasts for the next 3 chapters. If Kae or an opponent is KO'd while under the effects of Blazing!, they will lose the stock effect. The effect itself can also be replenished and stacked multiple times by using another Blazing! before the effect expires. The effectiveness of the hyper begins to shrink after exceeding 3 stacks; however, as during battle Kae's attack cannot exceed +9.

Blazing! is an extremely powerful high-risk Hyper that can be used to quickly deal massive damage to an opponent. The effect essentially works like

I'm on Fire! except for 3 chapters and with a stackable effect. Thus, like the card, the Hyper will give Kae a total boost of +2 Attack when the effect is active. As a result, the card itself is best used when Kae attacks first and has a further reduced defense stat to augment her attack, creating a dangerous situation for the opponent. The Hyper is best used to finish off an opponent (or opponents) that Kae is trailing, in hopes that Kae will not risk being KO'd as a result of her low defense stat. The player can also use the Hyper strategically to have an opponent within the effect's activation radius to lower their defense.

As to be expected, the hyper pairs very well with other damage increasing cards such as

I'm on Fire!. With a single stack of Blazing! and

I'm on Fire!, Kae will already have a +6 attack stat when attacking. Similar combos can also be made with

Rainbow-Colored Circle, with the latter providing Kae the opportunity to evade damage and deal a second wave of damage.

The main disadvantage to Blazing! is that it leaves Kae vulnerable with a poor defense stat. If an opponent such as Star Breaker is trailing Kae, they may be able to take advantage of her weak defenses during this time. Further, the opponent may have an increased attack if they were within the activation area of the Hyper.