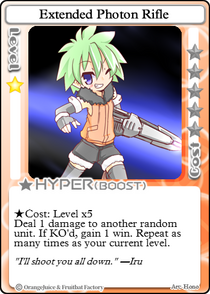 Extended Photon Rifle: Deal 1 damage to another random unit. If KO'd, gain 1 win. Repeat as many times as your current level.

Iru is non-direct combat wins focused character. Her hyper compliments this playstyle greatly, and is the easiest way for Iru to cement a victory through Win Normas.

Similar to x16 Big Rocket, Extended Photon Rifle gets more powerful the longer the game persists, but it's cost also grows along with it. Basically, playing this card will deal damage equal to your level to all other players, spread out among them. Theoretically, it is possible to hit one unit for five damage at Level 5, but damage isn't what you're looking for; it's KOs. Whereas Marc's hyper can only ever net 2 Wins per use, EPR is able to get three when played at the right times, and at half the cost per level. Its greater KO rate and lower cost is offset by the pure rng of its effect, making playing it effectively a waiting game, usually making the player wait until all three opponents have less than 6 HP between them to be played effectively.

Because of it's scaled cost, playing this card when going for Stars Normas becomes less and less rewarding with each Level. But even at Level 5 Stars Norma, it isn't without its benefits in the proper situations. If a weak, or weakened, opponent is in front of you, you can play EPR to shave their HP down, even if it's just a little, to more easily kill them in direct combat and steal their stars. This is where Iru's passive effect really comes into its own as a form of strategic gameplay. Bringing back the Big Rocket comparison, a Marc at Level 5 can only ever deal a solid five damage to one unit for the cost of 50 stars, which KOs most of the cast from full health with scarce few exceptions. EPR spreads that damage across three opponents at a fraction of the cost, making kills from full health all but impossible for a large portion of the cast, and if anyone is left with one health, the kill is guaranteed.

EPR can also be used to discourage opponents like Star Breaker or Yuki from attacking by cutting their HP down before they even reach you.