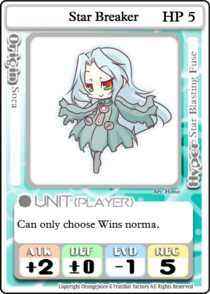 Star Breaker (スターブレイカー Sutābureikā), also known as Reika by the community, is one of the playable characters in 100% Orange Juice!. She was added to the game in DLC 7 alongside Sweet Breaker. Star Breaker originates from the game Sora in which she was the main antagonist.

Can only choose Wins Norma. (Chosen automatically when the player lands on a

As her name and passive imply, Star Breaker is designed to steamroll opponents through brute force with a heavily buffed attack stat. While similar to Tomomo and Yuki, Star Breaker features a very high attack stat with no defense or recovery drawbacks and decent health stat for a bully character. As a result, of her passive, Star Breaker plays slightly different than other bullies. As stars are completely useless to Star Breaker since she can't use them to norma, the player can have a complete disregard for the amount of stars they have and spend them in any way they choose. The player should spend the entire game assaulting other players at every chance they have and focus fully on

Encounter panels when they are unable to reach an opponent. This makes the BattlefieldBattlefield
Every 6 Chapters, all

Assault can help bring in much needed KOs as the game progress, and provide Star Breaker potentially weaker opponents to pick off. It may also be in the best interest of the player to bring cards like

Dark Side of Business to prevent opponents from reaching their next norma. She also benefits from a powerful Hyper that can reduce an opponent's health to 1, however, the card is inconsistent and may yield little reward to the player depending on the opponent and the player's luck.

While possessing a rather infamous reputation for being "OP" by newer players, Star Breaker has multiple weaknesses stemming from her passive, which substantially lower her odds of winning a match. Her powerful passive forces the player to always choose wins norma (her first norma is also 1 KO, not 10 stars) which is a large hindrance to her overall gameplay. Star Breaker faces a race against the norma clock since wins do not generate themselves like stars. If the player has not KO'd at least 8 opponents by norma 4, the game will likely be over for Star Breaker, as bosses and opponent's Hypers will cripple the player's wins progress. Likewise, if the player is unfortunate enough to be against NoName, both his passive and generally carried cards like

Oh My Friend and

Overseer will make it almost impossible for the player to find easy KOs or have any chance at winning. Star Breaker will also face an uphill battle on certain fields. Small boards like Vortex and Warfare give her less walk time to attack other characters and multiple

Encounter panels to feed her wins, however, large boards like White Winter give opponents lots of space to get away from Star Breaker. In the end, Star Breaker's success is highly dependent on how well she rolls and how poorly the opponent rolls. If the player cannot roll well and KO other opponents in a timely fashion, they are more or less doomed to lose the match.

By default, Star Breaker should aim for the wins norma and play aggressively at every turn whenever the opportunity presents itself. If the player is having particularly good RNG and rolls a string of 5-6s, Star Breaker can quickly crush opponents with her +2 attack in the early game. The player's main goal should be to get wins and slow the star collecting progress of other opponents if possible. The more wins the player can amass before norma 4, the higher the player's odds of winning in the late game will be. Her Hyper may also aid the player in the late game as well if RNG is permitting. 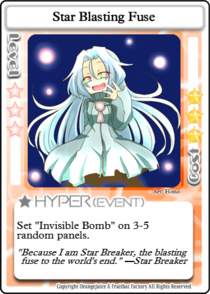 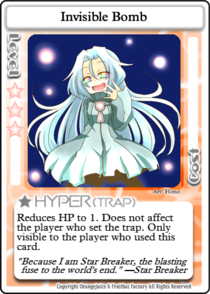 Reduces HP to 1. Does not affect the player who set the trap. Only visible to the player who used this card.
Hyper Info
Effect Type
Trap
Level
3
Cost
0 ★
Symbol
[[File:|30px|link=]]
Illustrator
Hono
"Because I am Star Breaker, the blasting fuse of the world's end." -Star Breaker

Star Breaker's hyper is Star Blasting Fuse. When the Hyper is used, it causes 3 to 5 Invisible Bomb to be placed randomly on the field. Landing on an Invisible Bomb will reduce the player's health to 1. The player who activated the card cannot be affected by the trap cards and is the only player who can see the locations of the bombs.

Star Blasting Fuse is a relatively inconsistent hyper similar to Krila's Hyper and the field event, MinelayerMinelayer
Every 3 Chapters, a Trap Card will be set on a randomly determined panel. These Trap Cards are not affiliated with the Center Deck, and will therefore not return to the Center Deck afterwards. The cards include:

Mimyuu's Hammer. When activated, the resulting Invisible Bomb become an unseen hazard to any player unfortunate enough to land on a panel with the trap on it. The main advantage of this Hyper is that it affords Star Breaker an excellent opportunity to KO an opponent while they're at their most vulnerable at 1 health. As a result, it can be extremely effective against high health and tank characters such as Kyoko. While the Hyper itself is quite expensive for most characters at the price of 30 stars, the price is advantageous for Star Breaker as it will enable her to deplete her star count if she is near being KO'd. Also, since she cannot complete Star Norma, the Hyper is essentially free for use as long as she has enough stars, and there is little reason to hold onto the card for very long.

Perhaps the best aspect to the Hyper, however, is the way it deals damage. Similar to a KO effect, the Hyper sets the opponent's health to 1, which means the effect will counter through the health increase of

Dance, Long-Eared Beasts! and still decrease the opponent's health, even if they are using

The blatant disadvantages to Star Blasting Fuse, however, is that the traps must be triggered by the opponent. Also, another player may be able to get the KO instead of Star Breaker, which may be problematic based on the current standings. The Hyper can also be dangerous for Star Breaker if she is playing against Syura or Alte as the trap will make them more likely to use their Hypers in response.