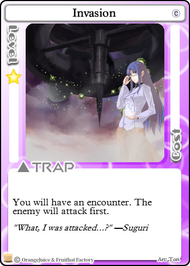 You will have an encounter. The enemy will attack first.
Level
1 ☆
Cost
0 ★
Limit
3 per Deck
Deck Points
N/A
Symbol
30px
Illustrator
Tori
Common Card
Expansion Pack
"What, I was attacked...?" —Suguri

Invasion is a 1-star trap card that causes the victim to fight a random NPC. The exchange is similar to an encounter panel, but the enemy gets the first attack.

Invasion acts as a less consistent, but potentially more deadly alternative to the guaranteed 1 damage of

Mimyuu's Hammer. The effectiveness of this trap depends on the enemy that shows up as well as the character who lands on it. Seagull has a much higher chance to deal damage or KO the victim than Robo Ball or Chicken, but the other two are harder to KO and are less likely to give the opponent a win. Characters that like to play traps like Saki can use this card as a part of their kit. In addition, characters who prey on weakened opponents like Yuki or Yuki (Dangerous) can also use this card effectively.

Characters susceptible to taking a lot of damage in combat can be put at risk by playing this card. Even characters like Yuki who benefit from having their opponents take damage can find the tables turned if she lands on Invasion. Characters like Chicken or Marie Poppo should avoid putting this card in the deck, as it can be very detrimental to them if they land on it and they don't benefit much from weakening their opponents.