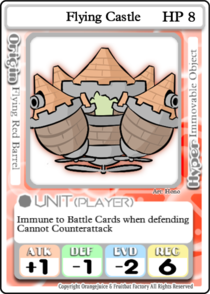 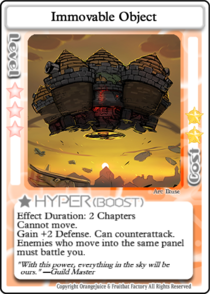 Illustrator
Neriume
"With this power, everything in the sky will be ours." -Guild Master

Flying Castle's hyper is Immovable Object, which skips Castle's next 2 turns, giving it a Defense boost of +2 and the ability to counter-attack.

The main downside of the Hyper is that depending on the opposing player's rolls, a player might not even roll into Flying Castle's space before the Hyper's duration ends. This problem is further worsened if the board is large and has multiple alternate paths, as the opponent may simply walk or warp around Flying Castle without entering combat.