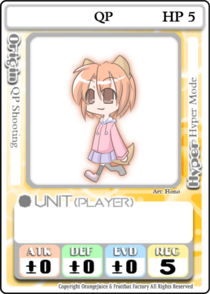 QP (きゅーぴー Kyūpī) is one of the four starting characters in 100% Orange Juice!, that the player can select when creating a new save file. She originates from the game QP Shooting in which she was the main character.

A carefree dog girl with a deep love of pudding, QP is a jack of all trades character with perfectly neutral stats across the board. QP features an HP stat of 5, no modifiers to her attack, defense, or evade stats, and no passive ability. As a result, QP has no specific niche to serve; she is neither an offensive nor defensive character and has no apparent strength or weakness besides being totally average. This gives QP multiple advantages in that her health is high enough to support combat with most opponents and

Encounter panels. She can also protect her stars from opponents without worrying about having to rely on either her defense or evasion stat, like most characters which favor one or the other. Further, since QP does not favor any particular playstyle, she can benefit from virtually any card as she does not have an exploitable weakness. The player is free to use any card they find and use it to their advantage if they can. QP can take advantage of almost any battle card to help her fighting potential including both

Reverse Attribute Field. Last, QP also benefits from one of the most unusual hypers in the game, that grants her three abilities that enable her both to fight, protect herself, and get back to the game.

QP's greatest strength of being average is also her greatest weakness, however, like most jack of all trades, she is a master of none. Without any stat modifier, the player's luck is completely random, with no "expected" performance. As such, the player cannot rely on any of her stats to perform in a certain way; no additional attack points and no additional defensive or evasion abilities like Suguri or Fernet for example. The player may go down quick or be very difficult to KO based on their unmodified dice rolls. Consequently, it may be best for QP to be played passively until either a battle card or her hyper card is drawn. It is also advisable that QP should stay away from

Like most characters in the cast, QP should generally aim for star norma and play passively unless either provoked or the opportunity to KO an opponent presents itself. The player will want to focus mainly on

Bonus panels and ensure they have at least 1 copy of QP's hyper for the late game if they can, especially to handle the Boss encounters. The player should only really pursue

Encounter panels if they have battle cards or a decent amount of HP. Overall the player will need to rely solely on their wits, to be victorious. 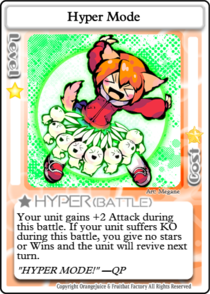 This unit gains +2 Attack during this battle. If your unit suffers KO during this battle, you give no stars or Wins and the unit will revive next turn.
Hyper Info
Effect Type
Battle
Level
1
Cost
10 ★
Symbol
[[File:|30px|link=]]
Illustrator
Megane
"HYPER MODE!" - QP

QP's hyper is Hyper Mode. When activated in a battle, the unit who played the card gains +2 attack. If the unit that played the card is KO'ed during the battle, the opponent will not be awarded any wins or stars and the unity will revive automatically on the next turn.

Hyper Mode is a very versatile hyper card, with a low-level requirement and extremely cheap activation price. The card provides the player with 3 benefits in total during the battle, which gives the user a broad range of options for any given circumstance. In the most general case, if the player has no other battle card and needs to quickly KO a low HP opponent, the +2 attack stat bonus can be extremely beneficial in increasing the players. Additionally, the player can pair the effect with an event card such as

Super All-Out Mode before the battle starts to boost their odds of victory even further. On the opposite side of the coin, if the player is low on HP and is being assaulted by either another player or a

Self-Destruct to prevent the player from losing stars and also ensures the opponent gains no stars or wins from the KO. This defensive use of the card is more common, as it is generally advisable not to use Hyper Mode in any instance where QP is able to normally survive combat. Either way, the card enables the player to take huge risks and escape a battle without any penalties, and given the low price, the player can use the hyper all throughout the course of the match, assuming they are lucky enough to draw multiple copies.

Diverse as it is, Hyper Mode isn't without weaknesses. The main problem the card suffers from is that, as advised above, it is not very good for attacking purposes since the secondary effect is more valuable. Although the card grants an attack buff, it does not guarantee positive result like Sora's

Extraordinary Specs as the player may still roll a 1, yielding a disappointing 3 attack. Thus the player will likely need to take measures to increase their odds of victory, such as boost their stats with an event card or lower their opponent's HP first. The player may also fail to self-KO (if that was their intention) if they roll too high on their defensive or evasive roll. This can be countered by using the hyper at 1 HP but, as to be expected, every additional point of HP the player has will increase the odds of failure.

In Co-op mode, QP doesn't change at all, as her recovery stat does not rise nor does her hyper price or effect altered.

As a result of her hyper, QP can be a half-decent attacker, as at max level the player will be able to have a +4 stat when using her hyper. Her HP pool should enable the player to last quite a few combats as well, before her likely KO as a consequence of her neutral defense and evasion stat. Overall she does not stand out as an attacker but can still be reasonably viable as one.

Similar to the attacker role, QP can be a competent guardian, thanks to her health pool and hyper. Her above average health will enable her to cast a good number of shields for her allies before KO. She can also use her hyper to both self-KO and deal some damage in the process and then be ready to start shielding allies immediately after KO. The player will also receive an additional defensive boost by using the role and thus increase QP's survivability.

Supporter is not a great matchup for QP, as she doesn't have any heavily increased stats on her own to keep her alive, and she will not receive any attack or defense buff as a supporter. While the role does provide a +1 evasion boost, it will not increase the player's survivability much during the late game, and the player will suffer from QP's lack of damage output.

Avenger can be viable for QP thanks to her already high HP pool, but the role is not well-supported by her neutral defense stat. The role also works relatively well with her hyper. If she is KO'd before her turn to attack, she will revive on the next turn, and if she isn't KO'd, the player will have an even higher bonus toward her attack stat to deal damage.

When the player begins a new game and selects their starting main character, they will receive the cards necessary to create a deck. If a players chooses QP as their starting character, they will begin the game with the provided 15 cards along with QP's unit card and hyper card. In concurrence with QP's stats, QP's starting deck does not appear to be designed with a particular playstyle in mind and instead gives the player a well rounded deck for any scenario.