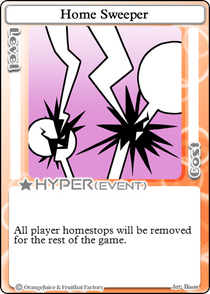 Home Sweeper is a hyper unique to the bosses of Co-Op mode.

This card is always played by the boss during its turn on Chapter 39 or later in Co-Op. It will permanently remove all home markers on the field, preventing players from being able to choose to stop on their homes. It also replaces existing

Home panels on the field with

Neutral panels (which then become

Boss panels. On Chapter 40, all panels but

Warp Move panels will stay as Boss panels.). If this card is skipped, the boss will attempt to play it on the following Chapter until successful.