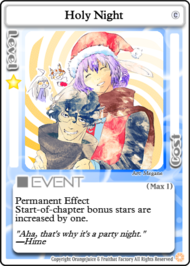 Holy Night is a 1-star level event card ideal for players aiming for star norma. Upon activation, the card benefits all players by providing a permanent increase of 1 to the star bonus provided at the beginning of each chapter. This means the bonus star equation

will have its last digit increase by 1, making it +2.

Holy Night is a zero-cost event card, with a uniquely permanent star increase effect. While Holy Night's effect might seem very small on paper, an additional star each chapter can make a huge distance in a short amount of time, especially in the late game where a single star can be the difference between achieving norma and being a single star short. Almost every character on the roster can benefit from the card, as it can be used either toward norma or for bullies to afford expensive battle cards for combat. In particular tank characters such as Fernet and Kyoko and bullied characters like Aru who rely on collecting stars, rather than combat, to win the game, stand to gain the most from the card. Even above tanks and bullied characters, however, the Cuties can gain more than any other character in the game as the event will trigger their passive which will provide them with even more stars on top of the stars given from Holy Night. Overall, the card can be used in almost any deck, if the player desires, as gaining more stars is more or less never a detriment.

The only real drawback of Holy Night is that it provides stars to all players, including the user's opponents. As a result, under the right circumstances, the card can be the difference between victory or defeat for the player. Likewise, while bully characters like Yuki can benefit from the card, it may not be worth packing in her deck, as it will likely aid the opponent more if the player is going for wins. Consequently, Star Breaker is perhaps the only character that should never pack this card, as her passive prevents her from collecting star normas. While the stars can help Star Breaker use more expensive battle cards like

Accel Hyper it is not advisable for her to use Holy Night, as it will only put her further behind the other players.