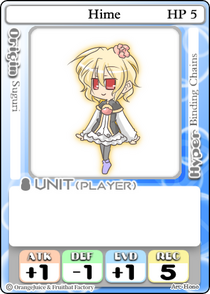 Hime (ヒメ Hime) is one of the unlockable characters in 100% Orange Juice!.

Similar to QP and Kai, Hime is a relatively balanced character that can adapt her playstyle to both the Win and Star Norma equally. More similar to the latter, Hime features a stat distribution that generally favors combat. While her negative defense stat makes her somewhat more fragile, her increased evade stat and higher health gives her better survivability overall against most opponents.

The main disadvantage of Hime is that her stats are rather awkwardly balanced. With her below average defense stat, her health is all she has to survive against extremely high rolls. As a result, while Hime does fairly well against random encounters, combat against heavily offensive opponents can be fatal.