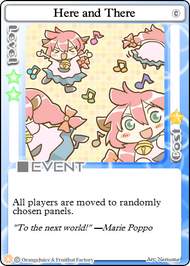 Here and There is a 2-star event card that warps each unit to a random panel individually. It effectively causes a one-time Random WarpRandom Warp
Every 5 Chapters, Each players will be warped to a randomly chosen panel at the beginning of the Chapter. field event.

Here and There is re-positioning card that is usually used to separate the player from their opponents in dangerous situations. It can also be used as a last ditch effort to keep an opponent from reaching their

Home base if the player doesn't mind being randomly warped themselves. Characters who are weak in combat like Aru or Saki benefit the most from this card due to its low cost and potentially life-saving effect, but any character that can play cards can make use of it for the same reasons. Tanks such as Fernet or Kyoko also benefit from distancing themselves from other players, as they often lack the tools to deal with persistent opponents chipping away at their health. Flying Castle in particular needs this card for the same reason, as it has very few options to deal with attackers outside of

Warp panels. Marie Poppo (Mixed) is the one of the best users of Here and There, as it triggers her passive in addition to separating her from attackers.

Due to the unpredictable nature of the warp effect, the user may occasionally end up in a worse situation than before they played the card. It is entirely possible for the player to end up close to opponents, surrounded by dangerous panels, or far away from wherever they were trying to go. Since this card is used mostly to separate players, characters who want to stay close to their opponents such as Kai or Star Breaker should avoid putting this card into their decks, as

Party Time will benefit them much more. The Cuties should consider other event cards for their deck over Here and There, due to the high chance it has of countering their hyper

Special Stage by scattering their audience.