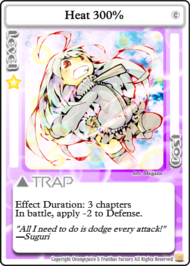 0
Symbol
30px
Illustrator
Megane
Common Card
Expansion Pack
"All I need to do is dodge every attack!" —Suguri

Heat 300% is a 1-star trap card that causes the victim to lose 2 defense for three chapters.

Heat 300% is a useful all-purpose trap card for characters who regularly engage in combat. The debuff it causes helps to cripple high defense characters like Kyoko as well as weaken neutral stat line characters like QP. Characters that can take advantage of the debuff on their opponents either throught heir stats or their mobility stand to benefit from 300% Heat the most. Mira fufills both categories thanks to her decent +1 ATK, the movement debuff applied by their traps, and the repositioning offered by

Leap Through Space. Kae is by far the most prolific user of this card. Being one of the only characters who wants to have her defense reduced, this card can serve as a debuff for opponents or as a buff for her is she lands on it herself. Although it can be difficult for her to capitalize on the ATK boost if her opponents are not nearby, cards like

Dash! can help her find fights during the limited buff duration.

As with any trap, placement is key in determining whether the card is a success or a dud. Even if an opponent triggers it, the player might not be in a position to reap the benefits, causing them to miss out or giving an opponent the opportunity to steal the rewards. Characters with poor EVD that have a hard time dealing damage will suffer immensely if they land on this trap. Even characters with normally high defense like Fernet will find themselves at risk of taking a lot of damage in any battles they participate in. On the other hand, characters with high EVD like Suguri don't usually defend in combat, making the trap less useful against them.