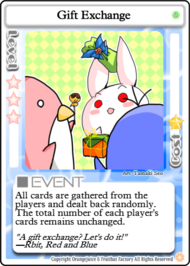 All cards are gathered from the players and dealt back randomly. The total number of each player's card remains unchanged.
Level
3 ☆
Cost
10 ★
Limit
3 per Deck
Deck Points

Gift Exchange is a 3-star event card that randomly redistributes all cards among the player's hands. Each player receives the same number of card that they were holding previously. It is possible for cards to remain in the same hand.

Depending on the character, Gift Exchange can range from a helpful tool for getting new cards to a disastrous event card that can throw the whole game away. This all revolves around the character's hyper card and whether or not they need specific cards to play at full strength. Characters with less impactful or niche hyper cards like Yuki's

Final Surgery don't particularly mind having their cards given to another player, especially if it means that they have a chance of receiving something more usable. Some characters even have hyper cards that will benefit them even if another player uses them. Marie Poppo (Mixed) has no issues with another player using

Subspace Tunnel, although she does miss out on the initial warp. Suguri (Ver.2), Store Manager, and Sweet Breaker benefit in a similar way with their respective hyper cards. The only danger is that opponents may not play these cards, wasting the hyper.

Much of the rest of the cast needs to consider the risks of adding Gift Exchange to the deck. While it does have to potential to net the player some powerful cards, it has just as much potential to give said cards away at a bad time. Characters with very powerful hyper cards like Sora's

Ubiquitous may not want to risk having this card in the deck if it means giving those hypers to other characters.