"Our mission is to let everyone enjoy the best Japanese games in English." -Jakke Elonel 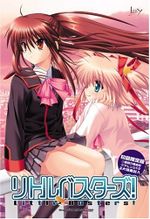 The cover of Little Busters!

Little Busters! (リトルバスターズ!), a Japanese visual novel, was released in Japan, on July 27th, 2007. Little Busters! was developed by Key and published by VisualArt.[4] On February 10th, 2008, a group of fans named Team Fluffy began an unofficial English translation of Little Busters! as a passion project.[5]

In early 2012, Ozhan Sen and Jakke Elonen were inspired to take an even more active role and expand the English-to-Japanese localization market, disappointed by the small amount of Japanese games getting localized. As a result, they decided to form the company Fruitbat Factory. Mr. Sen and Mr. Elonen contacted Yoshifumi Ishii, a translator the two enjoyed working with over the years, to join the new company, bringing the original staff count to three. When coming up with a name for the company, Jakke, at one point, said "That's such a fruitbat idea." and Ozhan liked the word "fruitbat", and so eventually this formed the name Fruitbat Factory.[12] With the foundation laid out, Fruitbat Factory was formed on February 10th, 2012.[3]

In 2013, Fruitbat Factory began talks with developer Orange_Juice about localizing 100% Orange Juice!, as Rockin' Android had opted not to make a translation for the game. 100% Orange Juice! was a 5-year anniversary game for Orange_Juice that was only marketed at Comiket 76, and subsequently had not sold well during its original 2009 JP release. After some discussion, Fruitbat Factory was allowed to localize the game, and in a risky move, decided to delay the game for 3 months for a Steam release with multiplayer to make the game easily playable. On May 16th, 2014, the game was released on steam.

Unlike previous titles, however, sales of the game remained steady as opposed to dropping off after the initial release. Now able to prove a consistent userbase, Fruitbat Factory was able to convince Orange_Juice that gradually adding more content to expand the now five-year-old game could be worth it. This culminated in the release of the first DLC, the Syura & Nanako Character Pack, on October 15th, 2014, which was received very well by the community. Since the DLC's release, the company has gradually improved the game's detail and graphics, and added new DLCs every few months. In 2017, the company also hired more coders specifically for 100% Orange Juice! (growing their staff to ten), enabling them to create more complicated events than any of the previous ones. At the end of 2017, Fruitbat Factory released Scramble!! for an Xmas Miracle!, the first scripted and complex event for the game, which has since been followed by more intricate special events.[13] 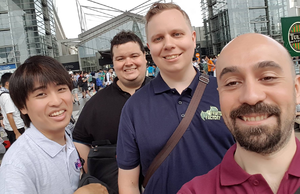