For the Future of the Toy Store 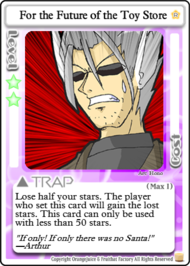 Lose half your stars. The player who set this card will gain the lost stars.
This card can only be used with less than 50 stars.
Level
2 ☆
Cost
0 ★
Limit
1 per Deck
Deck Points
N/A
Symbol
30px
Illustrator
Hono
Rare Card
Expansion Pack
"If only! If only there was no Santa!!" —Arthur

For the Future of The Toy Store is a 2-star trap that steals half of the victim's stars and gives them to the player that set the trap. It cannot be played if the player has 50 or more stars.

For the Future of The Toy Store is an incredibly powerful trap held back by a strict usage limit. It can only be played if the user has less than 50 stars, making it tough for most characters to play in the mid to late game unless they are doing very poorly. However, this restriction prevents players from abusing its power unless they are far behind, making it one of the best comeback cards in the game. Its effect makes it very similar to

Exchange, but both cards have their distinct niches. While Exchange can be played at any time, swaps hands, and is much less restrictive, For the Future of The Toy Store has the advantage of always being beneficial for the player if they can play around its restriction. Exchange can become a liability if the player manages to recover their stars before the trap is triggered, as they risk switching stars with a player that is worse off than them. For the Future of The Toy Store can never decrease the player's star total, and will continue to aid the player even if they start to pull ahead later in the game.

Characters that run high costing cards such as Nath or Tomomo can get more use out of this trap than most characters, as it will help them replenish their stars after using their expensive hyper cards. Characters that have a way to convert it into another card like Nico or Arthur can also play this card effectively, opting to play it early or convert it later when they have too many stars to play it normally. Thanks to her hyper,

Evil Mastermind, Yuki (Dangerous) can play For the Future of The Toy Store in situations where most characters would be unable to, allowing her to take full advantage of it at all points in the game.

While amazing for making comebacks, For the Future of the Toy Store can easily be a dead card for the majority of the game due to its restriction. It is also an extremely dangerous trap if an opponent manages to play it. Most star collectors, even more offensive characters like Kai or Yuki that use stars as a fallback, need to be wary of this card. While For the Future of the Toy Store is difficult for opponents to play, it is far from impossible, and triggering it is a quick and easy way to throw the game.