Flying Red Barrel received two official English localisations: the first localisation was released in September 2009 by Rockin' Android and was available on a number of sites, such as Gamersgate and Direct2Drive; and the second was a remastered localization by Fruitbat Factory in June 2020 which added remastered visuals, increased screen resolution, and other quality-of-life improvements, available from the Fruitbat Factory store and on Steam.[4][5]

The plot of Flying Red Barrel focuses on Marc, the game's young aviator, and her various adventures as she protects the skies as a member of The Guild. In the game's first three levels, Marc generally takes on a number of aerial outlaws, such as Tequila, sometimes crossing paths with Peat, a fellow pilot in The Guild, and Fernet, a friend of Marc's who has grown irritated with her increasing focus on working for The Guild. Marc is also sometimes assisted by her mentor, Islay.

In the game's fourth level, Marc is tasked with fighting against a rebellion by a number of the Guild's members, including Sherry, who tells Marc to be wary of The Guild's intentions. Heeding this warning, Marc herself fights against The Guild in the game's final level, culminating in a battle with the Flying Castle, an apparatus designed to give The Guild full control of the skies.

Flying Red Barrel notably features 18 different endings depending on how the player progresses through the game.

"People flying in the air? What baloney! If God had meant man to fly, He would have given him wings."
As though no such thing had ever been uttered, mankind has now gained its wings.
What people dreamed of as children is the reality of today.
Everyone reaches out for the sky together, carrying their wishes upon their wings.
With the rapid development of flight technology, an organization called the "Blue Sky Union" was established to maintain the order of the sky under law. People now call it "the Guild."
10 years have passed, and the Guild is now about to put an end to the prolonged anarchy of the sky.
This is a story of one of the aviators living in that era.
Flying Red Barrel ~The Diary of a Little Aviator~ is an old-school bullet hell/STG game with multiple endings based on actions you take. 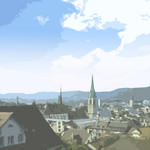 Flying Red Barrel takes place in a world where flight technology is a recent invention. This new technology saw rapid advancements, allowing for elaborate aircraft designs, however some still opt to use and develop land-based vehicles, such as trains. In order to protect the skies from lawlessness, the "Blue Sky Union", or more commonly known as "the Guild", was formed to police the skies. Flying Red Barrel begins 10 years after the formation of the Guild.

The setting is almost entirely airborne, with Red Barrel flying above clouds, with the exception when Red Barrel flies close to the ground to deal with troublemakers causing havoc on railroads. Only one town has been shown in the game however it is implied that there are other human settlements. The game's stages feature a variety of environments that can be assumed to be near the town, such as a large lagoon, rural fields, and a desert with railways running across the land.

Prior to Fruitbat Factory's localisation of Flying Red Barrel in 2020, the game was originally localized and released on September 22nd, 2009 by Rockin' Android. After working with Orange_Juice on localizing SUGURI and Acceleration of SUGURI, Rockin' Android continued their partnership with Orange_Juice and attained the licensing rights to publish Flying Red Barrel. The game was released as a digital download on various websites, such as Gamersgate, Direct2Drive, Rice Digital, and Amazon.[2] An update for the game was later released in October 2009, featuring improved translations for the game's dialogue.