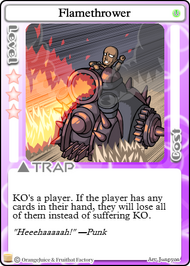 KO's a player.
If the player has any cards in their hand, they will lose all of them instead of suffering KO.
Level
3 ☆
Cost
0 ★
Limit
3 per Deck
Deck Points
N/A
Symbol
30px
Illustrator
Junpyon
Uncommon Card
Expansion Pack
"Heeehaaaaah!" —Punk

Flamethrower is a 3-star trap card that causes the victim to discard their entire hand. If they had no hand when the trap was triggered, they are KO'd instead, regardless of their current health.

Flamethrower is an essential trap for characters who want their opponents or even themselves to have as few cards as possible. Aru can use this card to empty her opponents' hands safely due to the free cost and the discard effect, setting her up for a huge

Present for You. Some characters even enjoy being afflicted by this card. Mei needs her hand to be empty in order to obtain

Red & Blue. A Flamethrower placed on her

Home can easily allow her to toss unneeded cards or unplayable cards without spending stars. While Store Manager cannot play this trap himself, landing on it will rid him of all the useless cards in his hand without causing him to take damage.

While the secondary KO effect sounds powerful, it does not get triggered very often. When it does, it rarely does more than slightly inconvenience the player affected by it, sometimes even giving them a free chance to heal in the process. Players who depend on hording cards, especially battle, healing, or hyper cards may want to steer clear of Flamethrower. Nath, QP (Dangerous), Alte, and others can all have a game ruined by landing on this trap and losing their precious cards. Sweet Breaker should also avoid this trap for the opposite reason. Due to its ability to rid her opponents of cards that have been reversed by

Melting Memories, Flamethrower is an effective counter card to her passive combat boost.