This page is currently being constructed and expanded. Please excuse us while we continue to add more information. Or help the 100% Orange Juice! Wiki by expanding it.

Fish-A-Fish is a special game mode that debuted on July 31st, 2020 with the Master Anglers event and has only appeared in the event. This mode is mostly identical to Normal Mode, except with the main addition of a special Fish-a-Fish minigame that activates at the end of every 7th chapter.

Before examining the particulars of the mode, below is a basic list of rule changes the player should be aware of:

During the minigame, all players will be given 90 seconds to earn as many points as they can by catching fish. Players can cast their hook at any location of the river, which will cause their hook to lower at a set speed. The first fish that the hook touches will be caught, and points will be earned depending on the fish's species and size. Bonus points can also be earned by performing a combo and by completing a set of fish. Intermittently throughout the minigame, a number of Speed Up events will activate, increasing both fish speed and hook speed for a short amount of time. 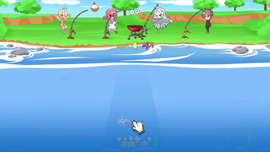 The player catches a crab, completing a set of fish.

When catching a fish, a number of base points are earned based on its species and size. Then, the player can also receive bonus points based upon their current species combo, and whether or not they complete the set of fish for the grill.

Upon starting the minigame, there will be a set of 3 randomly-selected fish species shown below the grill. The first player to catch these three species of fish will be awarded 20 bonus points, and then a set of 3 more fish will be randomly selected. Fish will disappear from below the grill as they are caught by the player, in order to indicate which species are left to catch for them.

There are a number of different species of fish that can be caught during the minigame, which each having its own unique point total, swimming speed, swimming style, and spawning depth. Fish of the same species can also vary in size and swimming speed, and this can affect the points earned for catching it. However, there are some types of fish which always award the same amount of points, regardless of size. In addition, the two pieces of junk and the pufferfish will never be selected as fish for the grill.

The results of the minigame.

At the end of the minigame, all players will earn Stars and Wins depending on their performance. Stars are awarded at a rate of 1 star for every 6 points earned, and wins are awarded based on the player's placing within the minigame.