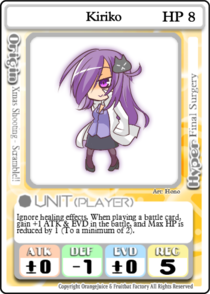 Kiriko (斬子 Kirko) is one of the playable characters in 100% Orange Juice!. She was added to the game in DLC 11 alongside NoName.

Ignore healing effects. When playing a battle card, gain +1 ATK & EVD in battle, and max HP is reduced by 1 (to a minimum of 2).

A sadistic "doctor" and Waruda gang member, Kiriko is a sadist constructed around an unusual passive and hyper. Kiriko herself, possess a health stat only rivaled by Flying Castle, and a slightly debuffed defense stat. As a result, Kiriko can be very difficult to defeat even with her below average defense if the player consistently rolls well. With her large amount of health, the player will likely be able to survive multiple confrontations, however, due to her inability to use healing cards, once a health point is lost in combat, it will not return unless she is inevitably KO'd. As a result, Kiriko's playstyle revolves solely around the player committing self-KOs to prevent Kiriko from losing stars. The general goal of Kiriko is to fight/survive until her health is reduced to 1, and then to use

Final Surgery to KO herself. This will cost the player 10 stars, but will repay them with 15 more stars. The player can also take advantage of certain field events such as Air RaidAir Raid
Every 5 Chapters, all units will take 1 damage at the beginning of the Chapter. and BomberBomber
Every 2 Chapters, place a visible bomb on a random panel. The bomb will explode within 1 to 4 Chapters, and units within 2 panels in a cross-shaped area of the bomb panel will take damage. to help KO her if the player does not have her Hyper. Other cards such as

Cloud of Seagulls and

Lonely Chariot can also be used to help the player KO themselves, to restore her to full health. While battle cards should generally be avoided to preserve Kiriko's high health stat, the player should use them when it is strategic to do so. In emergency situations, where the player is low on health, defense cards can be used to keep Kiriko alive. In the late game, the player can also use offensive battle cards for powerful assaults to KO other opponents for more stars. While they can be used at any time, battle cards are generally better used toward the late game, however, as the health reduction from Kiriko's passive will permanently lower her health stat for the duration of the game.

Kiriko's main disadvantage is her build and her Hyper reliance. Even with her large pool, Kiriko is not a tank, as her below average defense can result in her health being depleted quickly if the player rolls poorly. If the player rolls 1, and a seagull rolls a 6, the player will already have lost 75% of their health. The more blatant disadvantage is that Kiriko cannot heal herself under any circumstance including cards,

Dance, Long-Eared Beasts! if the player should get their hands on it). As a result, every battle will be a risk to Kiriko's unhealable health, and combat is not advisable unless the player has to. The player may also never get the chance to use Kiriko's Hyper depending on how successful opponents are at KOing each other. Further, her inability to use many battle cards forces the player to use such cards sparingly, which can make it more difficult for the player to attack and defend.

Kiriko should almost always be played for star norma and should play passive, letting other players beat themselves up so she can steal the KO with her Hyper. Early on in the game, the player should avoid confronting other players while focusing on

Draw panels. The player should keep trying to draw cards until they find her Hyper, as it is essential to her success. In the late game past norma 4, the player should start using battle cards if the situation to either assault another player far ahead of Kiriko occurs or if they need to protect themselves from an opponent's attack. 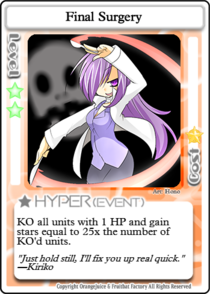 Kiriko's Hyper is Final Surgery. When the Hyper is used, it KO's all units with 1 HP and the player gains 25 stars for each KO'd unit (player included).

Final Surgery is an overall powerful Hyper that can both KO the opponent and player and provides stars, like a cheaper improved version of

Air Strike. From level 2 onward, the player will be able to use the card to KO opponents and themselves if the situation presents itself. Due to its cheap price, the player will always gain at least 15 stars and 90 at most. The Hyper should generally be used, however, to KO Kiriko when her health is depleted to restore it back to 8 without losing stars.

The Hyper itself can be best used with combos such as

Sealed Guardian, with the later, while rare, enabling Kiriko to KO everyone for a gain of 100 stars. Final Surgery can also be used as a deterrent and counter against other characters and combos. For instance, Syura will be at a large disadvantage as her Hyper and passive rely on being at 1 health. Star Breaker will also have difficulty using her Hyper as it will run the risk of providing Kiriko with free bait for Final Surgery.

The main downside of the Final Surgery is that it is a situational Hyper. If the player is particularly unlucky, the opportunity may never arise to use the card if Kiriko and other opponents are consistently KO'd successfully without reaching a health stat of 1. The Hyper is also susceptible to

Play of the Gods, as it is an event card, meaning other players may be able to profit from it and KO themselves as Kiriko normally would.