Difference between revisions of "Final Battle" 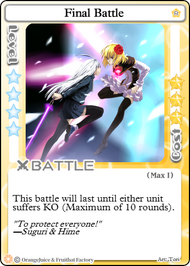 Final Battle is a 4-star battle card with game-ending potential. Upon activation, both players will enter a seemingly endless battle in which one player must be KO'd to end the battle. (There are 10 battle phases in total)

Final Battle is one of the most powerful and expensive battle cards in the game, more or less guaranteeing that one player will be KO'd during the next battle. The card itself is much like a stronger

Little War, extending the battle time to such a length that it is almost impossible for both players to survive except in rare circumstances. As a result, the player should always attempt to use the card when the odds of victory are in their favor. This can easily be accomplished either using high attack characters such as Yuki and Tomomo or with characters with nonbattle offensive hyper cards that combo with the card to brutal effect, such as

Solid Witch. If the player combines the card with any of the above, they are virtually guaranteed to win the battle. The player will also have the leg up, as the opponent will be unable to predict the card since it is a battle card. Likewise, the card also works very well against low attack tank characters such as Fernet and Marie Poppo, as most characters can effectively dodge their low counter-attacks while quickly chipping down their high health stats. Alternatively, and perhaps the most recognized way to use the card, however, is to use it as either a last-ditch effort to stop a player from winning or for the player to win by battling a high HP opponent on a

Home panel whose defeat would yield enough stars to win. As the card is high level and expensive, it is meant to be used as a last stand type card to determine the game in most cases.

As one might expect, the main downside to Final Battle is that it is a battle card and it's extremely expensive. To get the most out of the card, the player will want to combo it, but the price tag will likely be in the 50 star range. The player will need to be sure that the star reward from the battle will be greater than the price to use the card or combo it. While the player could lower the price with

President's Privilege before comboing, it would require the player to use their entire hand and leave themselves vulnerable. Consequently, since the card is a battle card, it also has substantially less possible combos than

Little War. Characters with strong battle hyper cards like Peat and Nath will be unable to combo their powerful hypers unless the opponent activates the card. However, since the card is a battle card, the player is very unlikely to predict the activation of the card and may not use a battle card to up their odds of survival or avoid it. Final Battle is also problematic since it can backfire substantially. If the player has terrible roll luck or if the opponent uses a powerful battle card like

Accel Hyper in response, the player can easily be the person KO'd.