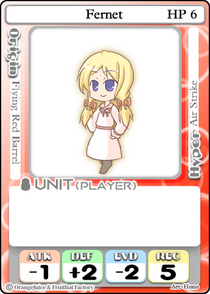 Fernet (フェルネット Ferunetto) is one of the unlockable characters in 100% Orange Juice!. She originates from the game Flying Red Barrel where she was a minor supporting character.

Like her passive and bossy persona, Fernet is a tank character centered around a colossal health stat of 6 and a greatly buffed defense stat. Of the positive stats she possesses, Fernet boasts a defense stat only matched by those of Nanako and Kyousuke (and only surpassed by Kyoko) but has the added bonus of having more HP than any of them. As a result, Fernet can shrug off most combat damage with relative ease and handle a maximum of 5 combats before getting KO'd, assuming her defense rolls were high. Bully characters such as Star Breaker will suffer the most against Fernet, as even the strongest of attacks will usually fail to KO her. Fernet will always roll at least a 3 for defense, enabling her to survive hypers like

Another Ultimate Weapon which usually result in a guaranteed KO for the opponent. Fernet can also enjoy the absence of fear when approaching

Boss panels in the late game, as bosses will most likely not be able to KO her too.

Like most tanks, Fernet suffers from a few key weaknesses that prevent her from becoming unbeatable. With a debuffed attack stat and a heavily reduced evasion stat, being a defensive damage sponge is nearly all Fernet can do against an opponent. Fernet frequently struggles to hit evading targets, cannot deal much retaliatory damage, and often fails to finish off opponents with 1 health point left. Furthermore, with low evasion, she will almost assuredly be KO'd after 5 combats without healing cards. She is also at risk from

Encounter panels, which can quickly chip away at her large pool of health. As a result, Fernet in particular suffers from the BattlefieldBattlefield
Every 6 Chapters, all

Encounter panels. This effect lasts for 3 Chapters. and Air RaidAir Raid
Every 5 Chapters, all units will take 1 damage at the beginning of the Chapter. field events. Even a measly 1 attack can often slip through Fernet's -2 evade stat, as she only has a 50% chance of dodging it. However, these odds are still better than Kyoko's, a similar tank who cannot evade, and thus the ability to evade itself can be considered an advantage. Also, since Fernet lacks a very good hyper card to help her in the late game, healing cards and

Unsurprisingly, Fernet should always go for star norma unless she manages to attain many wins through bizarre circumstances. While it is not impossible, it is highly unlikely for players to get wins with her. Generally, Fernet breezes through collecting and protecting her stars thanks to her stats. Consequently, opponents often ignore her in the early game and wait until the late game to try to KO her. Fernet should always focus on

Bonus panels to ensure more stars for norma, and maintain an appropriate supply of cards to heal and protect her in the late game.